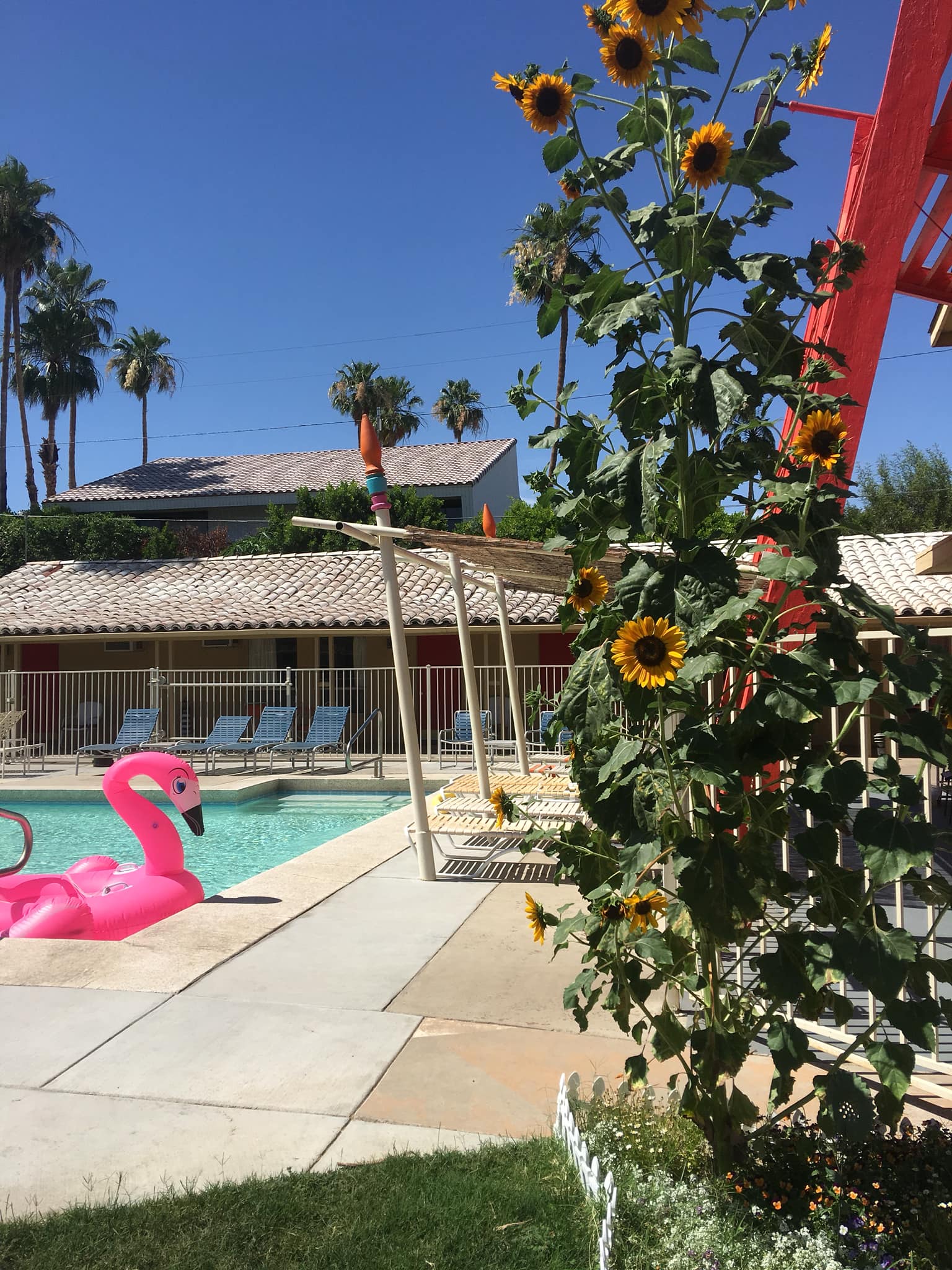 A visit to the Aloha Hotel is a step back in time.

Built in 1947, the property was purchased in 1971 by Mona’s mother, who previously owned the Four Trees Restaurant in Hollywood. She came to Palm Springs because it helped with her asthma, and ran the hotel for 40 years before Mona took over.

“I am so blessed to meet so many wonderful travelers,” she said. “The foreigners love it, and most feel like it’s home.”

The 11-room Aloha Hotel is the first property in the Tahquitz River Estates, and while the poolside suites are all restored with new beds, they contain the original 1950s furniture and decor. Several movies, music videos, and magazine spreads have been shot at the kitschy hotel, and when upgrades are available, especially mid-week, Mona gives them to guests, free of charge.

At one time, the hotel was called the Palo Verde Inn — the building once had a big “P” on it, and Mona found a vintage key and embroidered blanket with the name — but it was renamed the Aloha Hotel in order to be the first hotel in the phone book.

“Aloha means ‘hello’ and ‘goodbye,’ and everyone comes back, even 30 years later,” Mona said. “So, there are no goodbyes. Aloha, and mahalo!”

At the beloved Desert Riviera, guests become family. This mid-century modern hotel has a loyal — and even international — fanbase, with some guests coming to stay multiple times a year.

The Desert Riviera has everything you need for a fun, carefree getaway. 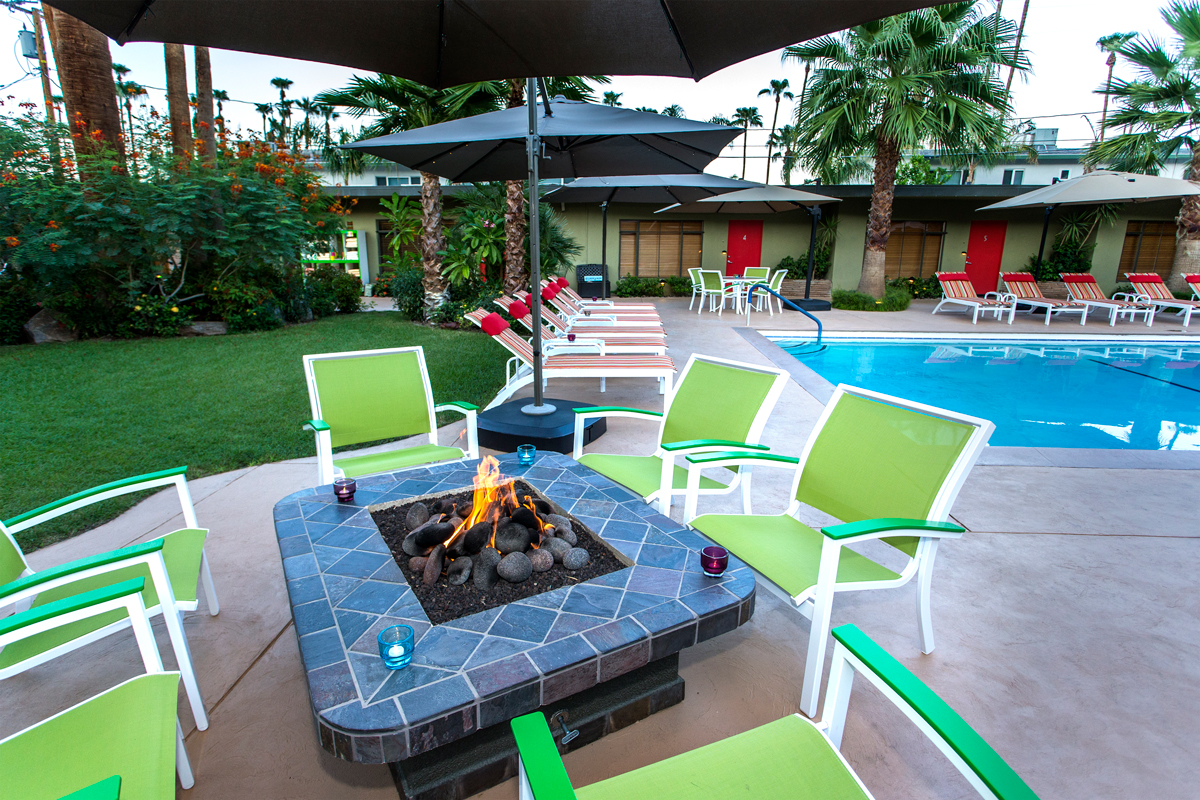 Built in 1951 and designed by Herbert W. Burns, this mid-century modern hotel is now under new ownership, but nothing will change for guests. The Desert Riviera still offers fantastic complimentary amenities, including use of retro bikes, continental breakfast, and concierge services to help with everything from restaurant reservations to golf tee times.

“We’re all about the customer service and community,” general manager Misty Roland says.

The Desert Riviera has a loyal fanbase, with repeat guests coming back annually — and in some cases, multiple times a year. They love that the pool is heated to 93 degrees in the winter, and parties are held throughout the year to mark special occasions — on Valentine’s Day, guests might find a chocolate fountain set up outside, and on the Super Bowl, the big game will be on, with a big spread of snacks.

“Guests like that we’re a boutique property, where the pool is open 24 hours,” Misty says. “There’s an open layout, and they enjoy that we have a lot of greenery and sunshine, instead of a concrete pool area.”

The Desert Riviera attracts guests from around the world — China, Russia, Kenya, England — who love the Palm Springs experience.

“Sometimes, we don’t even have anyone here from the United States,” Misty says. “It’s about understanding one another, and we’ll all sit around the fire pit and talk and play card games.”

Step foot on the Dive Palm Springs property, and you’ll immediately be transported to the French Riviera of the 1960s. 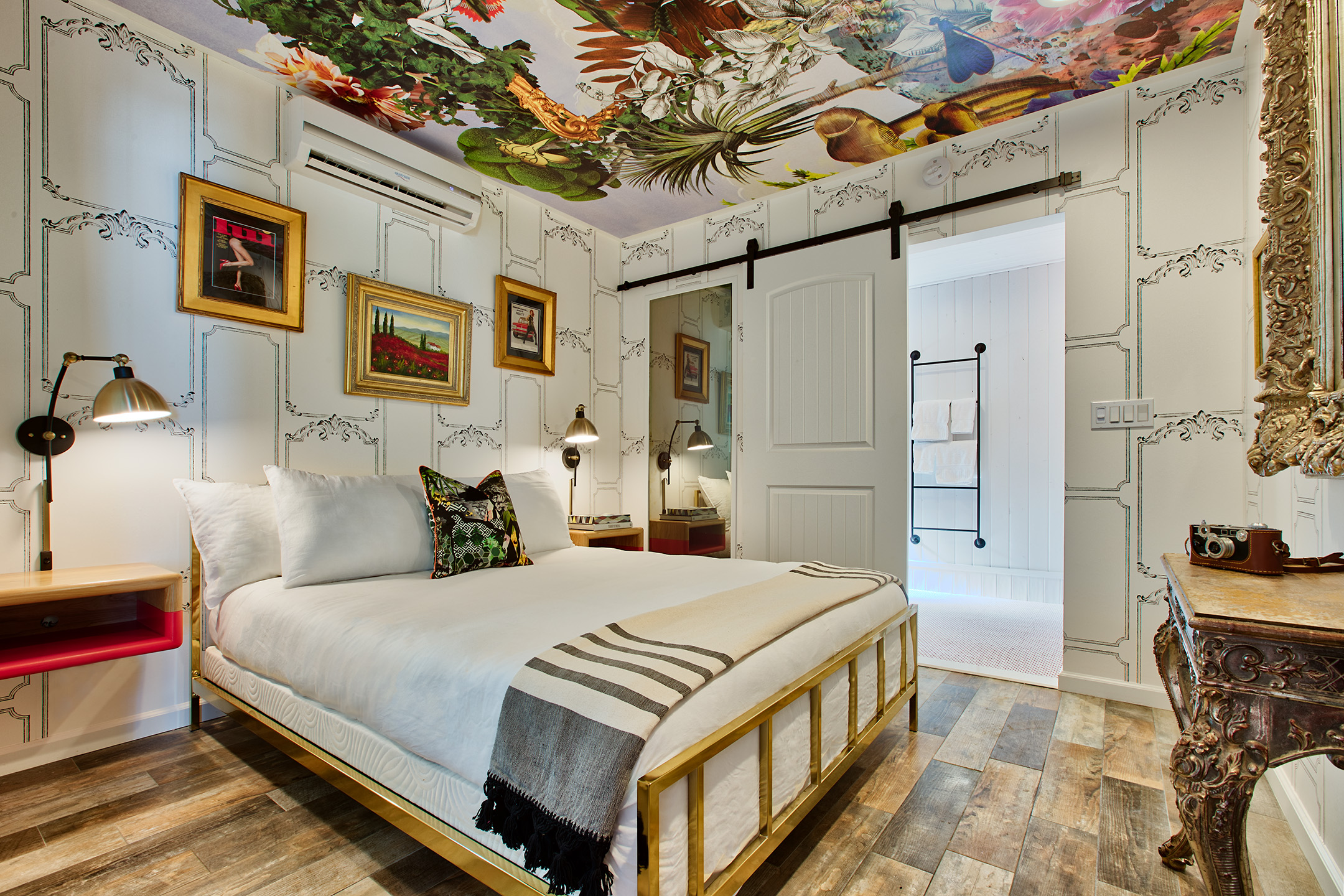 Dive Palm Springs opened in August 2019 after a two-month renovation. The hotel was built in 1954 as the Sunrise Villa, a western-style hotel. Over the years, it changed names and themes, ultimately becoming the Alpine Gardens before transforming into Colt’s Lodge in 2015. Since being purchased earlier this year, the 11-room property has been “extensively redesigned, both inside and out,” new owner Abdi Manavi says. “We have developed a sense of luxury in all the rooms, and a feeling of serenity throughout the different areas of the grounds.”

The hotel features furnishings by Serena & Lily and Anthropologie, premium linens, and original murals. Most of the King rooms come with an outdoor patio, complete with an oversized daybed, and one has a private hot tub. The most magical room is the La Reve, French for “The Dream.” This room has a custom ceiling mural and wallpaper by Christian Lacroix, a solid brass queen bed with an ultra-comfortable Tuft and Needle mattress, and a red-tiled bathroom with a rainfall shower and smoked glass two-way mirror between the bedroom and shower.

“Dive is more than a hotel,” Abdi says. “It’s a private luxury time machine. Evoking the casual elegance of Saint Tropez in the 1960s, we created Dive to transport our guests to a romantic forgotten world where it’s still safe to relax, play, explore, and release all the trappings of modern life.”

Dive is an adults-only property, and can host events for up to 150 people, including weddings, retreats, and reunions. Guests have been raving about the lush grounds, cozy daybeds, the restored original Libott pool, the koi pond, and The Orchard — Dive calls this its “vacation spot within a vacation spot,” as it has a two-person swing chair, waterfall, comfortable couches and loungers, and a vintage neon sign of a diving girl, affectionally nicknamed Lulu.

“My business partner Dale Fox and I have created an intimate atmosphere for our guests, as you would have staying at a friend’s house,” Abdi says. “We are here to provide magic and ensure our guests are relaxed and happy during their stay. Though I take on the role of an owner and general manager, my business card says ‘Liaison to Happiness.'”

It's bold, it's elegant, it's classic — it's The Palm Springs Hotel. Learn more about this boutique property here: bit.ly/3BCnEty ... See MoreSee Less

In need of some pool time? Look no further than Sparrows Lodge. Learn more about this hideaway here: bit.ly/36U35uq ... See MoreSee Less