It has been over a century since Hollywood put Palm Springs on the map. Rudolph Valentino may have been the first to bring it to national recognition when he honeymooned with Natacha Rambova at Florilla White’s Palm Springs Inn. What’s so newsworthy about that? Well, he was not quite legally divorced from his first wife, actress Jean Acker, and he was arrested for bigamy. Escándalo!

Since then, a lot of privately owned resorts in Palm Springs have opened, and they are all very special. Some had a prior life as private homes for recognizable Hollywood names, others were built by starchitects, and many have wonderful stories about well-known people who stayed there. Each has its own personality and all of them are charming. Several have that old Palm Springs feel and some are classic mid-century modern retreats, but there is one men’s resort that has combined the old Hollywood feel with the new Hollywood aesthetic: the Descanso Resort near the Uptown Design District. 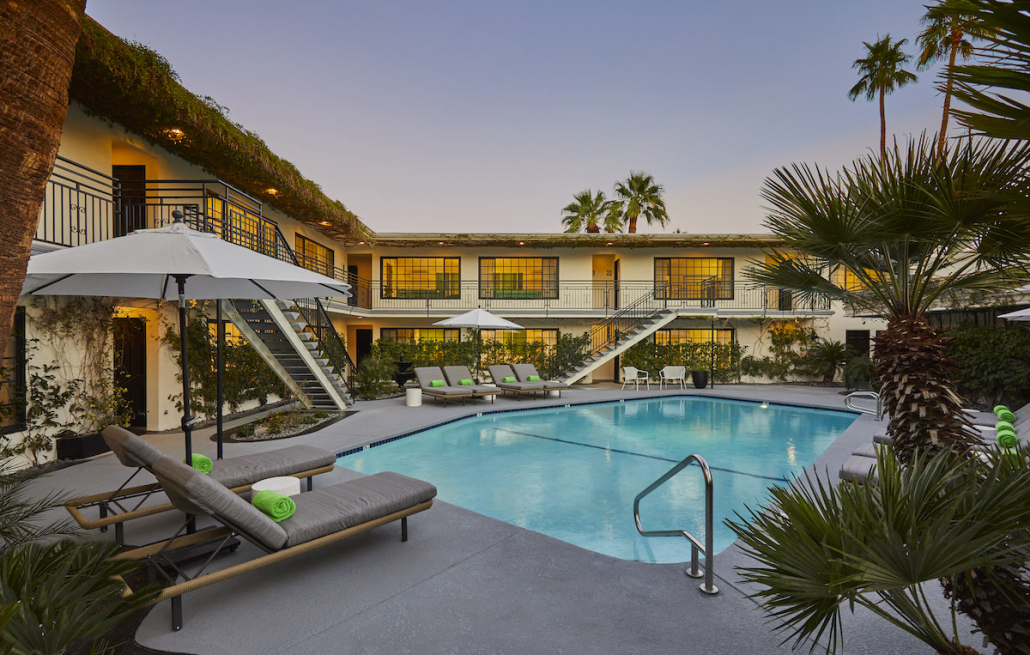 The English translation of the Spanish word “Descanso” is “break,” as in “you deserve a break,” and young professionals looking for that Hollywood Roosevelt pool feel with a tropical vibe will definitely appreciate the look, feel, and social amenities at Descanso. The resort has only been open for a few months, but the reviews are already in — and they’re five-star raves.

Built in 1946 and last known as East Canyon Resort, the property has good bones — a classic, sought-after exterior design, with its large suites around a beautiful pool and spa — but by the time 2020 rolled around, it was very much in need of some TLC. A “group of guys from Portland” (who now live in my head as the Portland Authority [the Authority™]) recognized its potential, paid the man, and got to work.

They started by tackling the landscaping. The view of the pool was completely obstructed by greenery covering the eaves, so straight away they cut some Louise Brooks bangs, or fringe if you’re posh (and we are), and began finding out what was underneath the overgrown flora.

Now landscaped for maximum comfort and privacy, every lounge chair, every structure, every spot in the resort has a clear eyeline to the shimmering (saltwater!) pool, the majestic palms dotting the horizon, and the grandeur of the San Jacinto Mountains backdropping the picturesque view. 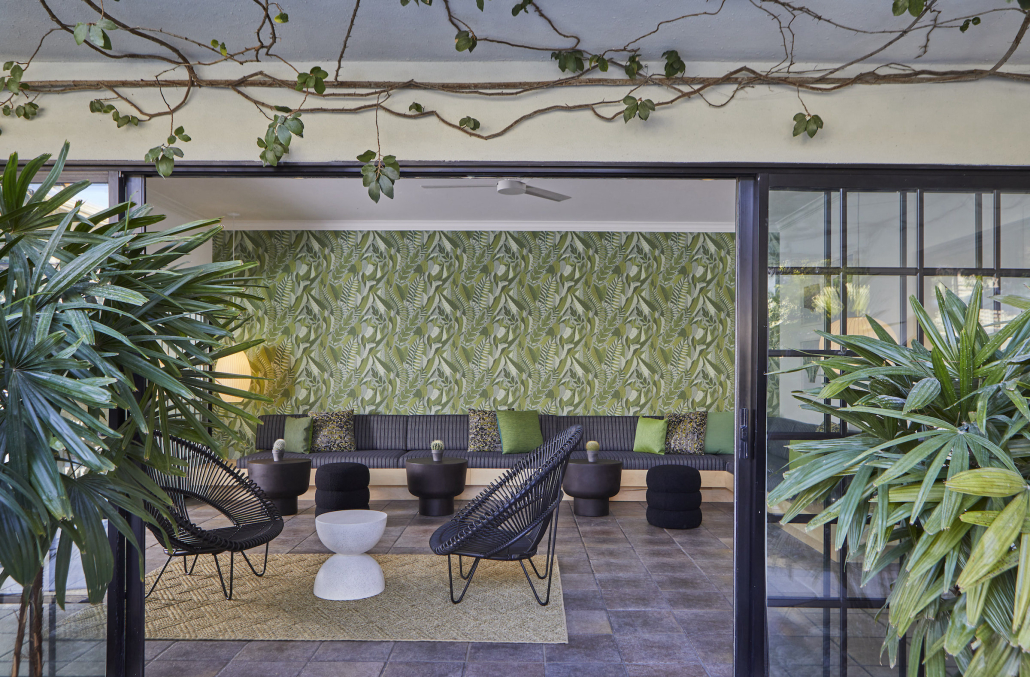 The property is swanky but not fussy; it has a casual elegance that makes you feel like something special is about to happen. Two white columns flank the entrance, which leads to a breezeway filled with lush exotic greenery and white wrought iron and frosted-glass gates.

The all-glass lobby is cheerful with its funky 1970s green and white flowered front desk and attached sitting room. All of the wall art is mid-mod style, including photos by Slim Aarons and current local William Dey. Paintings are by Shawn Savage, who is known around these parts as the “Palm Springs Lifestyle GURU and the go-to guy for top interior designers.”

Varying in size from 400 square feet to 515 square feet, with either a poolside or balcony view, the 16 suites are festooned in the hues of the desert —  armless couches wrapped in palm tree green, rich charcoal and cloud-white checkered accent chairs, sleek platform king beds dressed in crisp white linens, accent walls in blues and greens, and desertscape seagrass floor tiles. It is sleek mid-century modern design with a firm nod to minimalism.

The suites also come with a fridge, a safe, an iron, and a hairdryer, but let’s talk about the bathrooms. You guys, they have freestanding deep white porcelain tubs, Gilchrest & Soames luxury bath products, and little white tables on either side of the tub to rest your cocktail. Big fluffy green towels are for après bath. 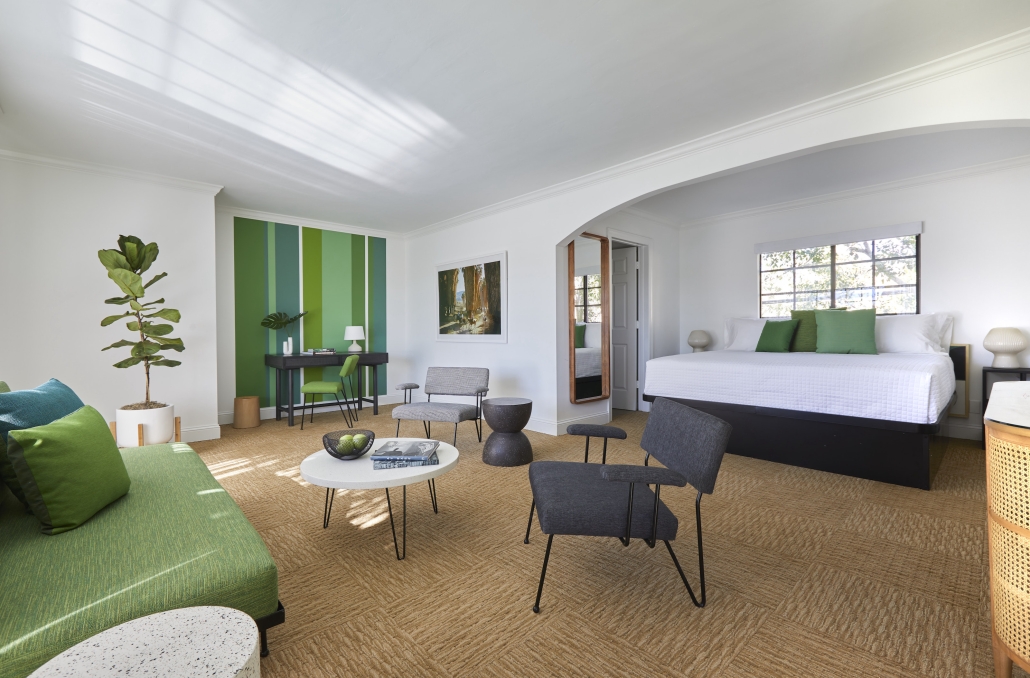 Because a vacation should be all about the aaaahhh, and not about waiting for an available table, Descanso provides a full-on craft services breakfast: fruits, yogurts, croissants, ham and cheese, granola, etc. Lunch is ordered in from a Palm Springs eatery, like Aspen Mills Bakery, with offerings including delectable sandwiches and salads. Snacks and beverages are readily available in the 24-hour cantina, but dinner is all about going out to one of our fabulous restaurants and joining in the merry at the many bars that cater to the gay community. Of course, you’re not restricted to gay establishments; the world is your oyster in Palm Springs. So, spice it up, throw on some Tabasco, and enjoy.

If you’re looking for recommendations, the Descanso’s staff is more than accommodating, so just ask. The Wi-Fi is strong with this one — if you want to do your own research on where to go for drinks or dinner, or have to work on that script or secure that deal, you’re in the money. 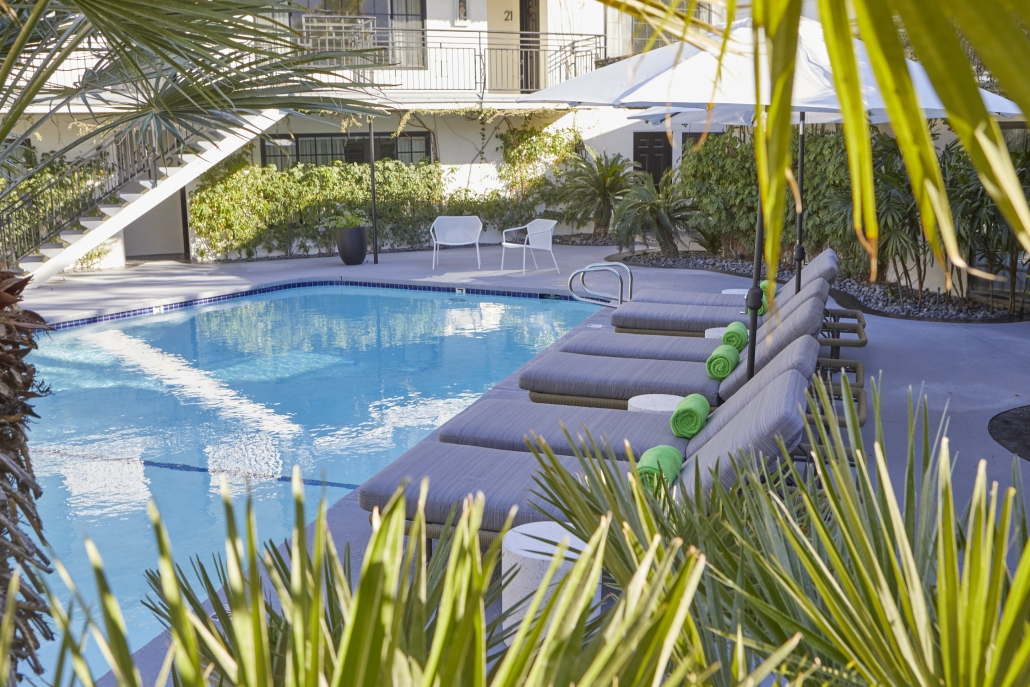 Feeling adventurous? Grab one of the bikes (complimentary use for guests!), tool around downtown, then pop back for a quick outdoor shower and have that massage you’ve been looking forward to (the one you booked from Descanso’s well-curated list of male massage therapists).

When your massage is finished, have a soak in the spa beneath the courtyard’s misters — a lovely combination of cooled air and steamy body, but not so wet as to douse the flames from the fire pit. If it’s the weekend, you might like to time it around Wine O’Clock, Descanso’s happy hour. Mix it up with new friends, or have an intimate date for two, or three — no one’s judgy here. We’re too busy spending every day in paradise. 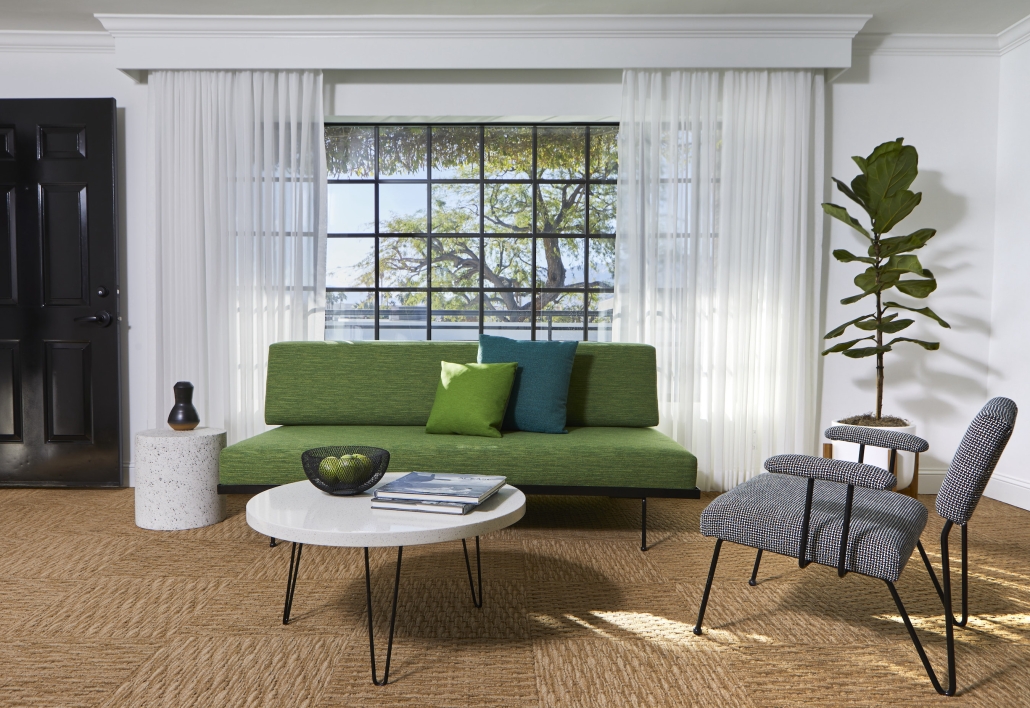 The Palm Springs International Film Fest (PSIFF) is a very big deal, and not just to Palm Springs. It is, in fact, true to its name, international. Filmmakers and cinephiles come in from all over the world to see the showcased films.

And there are movie stars. So many movie stars. We are lousy with movie stars. (That’s an expression meaning “we have a lot,” we treat them great, not to worry.) You might run into one at a restaurant, because they have to eat, even if it is just a tiny bit. And we have some pretty great restaurants. They’ll be all up and down the valley, just like in the old days. Ah, the old days…

“Picture this: Palm Springs, 1958, Desi driving the latest model Cadillac convertible down Palm Canyon Drive, Lucy in the passenger seat, a pink polka dot scarf keeping her red hair in place, which is good, because the fire department might have thought her head was on fire without it and had to take action. And she had these big white sunnies that made her look like a movie star. Because she was, you know.” — Sophia Petrillo (IYKYK)

PSIFF turns 34 this year, and she’s grown into quite the boss — last year, there were around 1,000 entries from more than 60 countries, with only 130 films making the cut. For 2023, some big names will be receiving awards from the festival. Here’s the rundown:

Michelle Yeoh, International Star Award, Everything Everywhere All At Once

Also, I think I missed a memo — and I don’t even know how one might put this in a memo — but one category is Talking Pictures, which appears to be studio backed films with sound. Is that new? Is that because…why is that? Someone forward me the memo, I need the memo!

There is a category of Gay/Queer Culture films, which is pretty self-explanatory. And then Fully Subtitled Films which is probably where the “International” part comes in because they’re not in English. Just thinking out loud here, but …you know what, you can figure it out. I gave you the links. You may not even care. But if you got the memo, still forward it, please.

If you’d like to see a schedule by day go here. If you’re curious about the venues, click here.

If I sound like I’m a little bitter, you got me. It’s one of the biggest international events in Palm Springs and I’ve never been. But you can go! Get your tickets here. Then you can blog all about it and tag us so I can live vicariously through you! Plan?

Be sure to take lots of pictures, and if you see a UFO at night, for heaven’s sake, zoom in and hold the camera steady. Tag me in that one, too.