You are here: Home1 / Blog2 / architecture

While on assignment for BBC News, Tayfun King was interviewing the owner of a boutique hotel in Buenos Aires when it hit him — he wanted to be the one running an inn.

As a travel reporter, Tayfun was immersed in the hospitality industry, crisscrossing the globe to learn more about the world’s most fabulous hotels. This wasn’t his original career choice — while studying mathematics and management at Cambridge University, he made a promise to himself: if he graduated with a first class honors degree, he would turn down the financial job offers he had received to follow his passion and become a professional Latin American dancer. Tayfun graduated with honors, and embarked on a dancing career, which led to him becoming a television journalist and host with the BBC, presenting programs on technology and travel.

“The travel show is where I developed my passion for boutique hotels,” Tayfun says. “I traveled to over 70 countries and 200 cities, and more than anything, staying at these amazing boutique hotels around the world stood out.”

Tayfun was fascinated by how these properties were able to forge their own identities, with each room connected despite their individual distinct themes. The owners he spoke with had “a passion that was coming through so clearly,” Tayfun says. “It was hard work for them, but they loved it and being able to express their creativity.”

In 2014, Tayfun launched a hospitality company in Los Angeles. He opened a property in Venice Beach, and then turned his attention east to Palm Springs. He was interested in a particular hotel for sale, but when his realtor showed him 641 E. San Lorenzo Road — the resort formerly known as Escape — Tayfun knew this was the place. 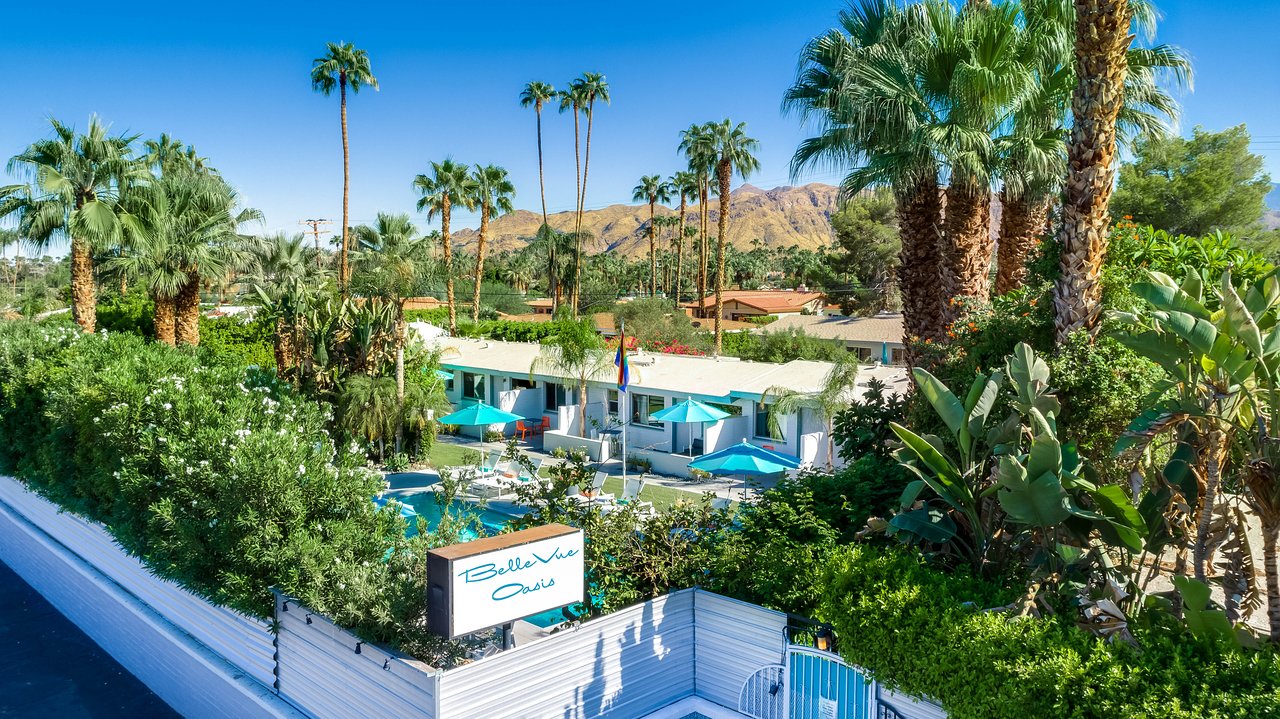 “I didn’t expect that,” Tayfun says. “I was there to have a matter-of-fact look around, but once I walked in and saw the entrance, I had an emotional reaction. The feeling you get when you’re there is so welcoming. It’s so natural, and there’s so much greenery with the grass, the trees, and the flowers. If I were coming to Palm Springs for a stay, I would love to stay here.”

A lot has changed at the mid-century modern property, starting with the name. Tayfun chose BelleVue Oasis because “belle vue” means “beautiful view” in French and “was what I was experiencing in the moment,” he says. The 13-room hotel has a new pool, pool deck, and interiors, plus recently installed turf and two putting greens. The mature palms and tropical landscaping are still in place, and guests rave about being able to enjoy the serene setting from their private patios.

“A common reaction is this is a hidden gem in Palm Springs — it’s beautiful, it’s lovely, it’s an oasis,” Tayfun says. “We have a high number of guests who keep returning to the property, and people who say their friends told them to stay here.”

Tayfun plans on developing a boutique hotel brand that will first grow in California before expanding, and is excited to get it started in Palm Springs. For him, it’s important that hotels tap into the history and true essence of the cities they are in, and he wants to make sure that people know as soon as they arrive at BelleVue Oasis that they are in Palm Springs.

“I love Palm Springs,” he says. “I love the energy, the people are friendly, it’s spread out, and it’s so well groomed.

From the time they book to the time they check out, Tayfun aims to make it so guests enjoy every part of the BelleVue Oasis experience. He wants them to look forward to their stay, building it up ahead of time and then having their expectations surpassed once they arrive, and to leave with lasting memories of their visit.

“It’s so fulfilling and exciting hearing what guests have to say,” Tayfun says. “That has been so rewarding and greater than what I thought it would be.” 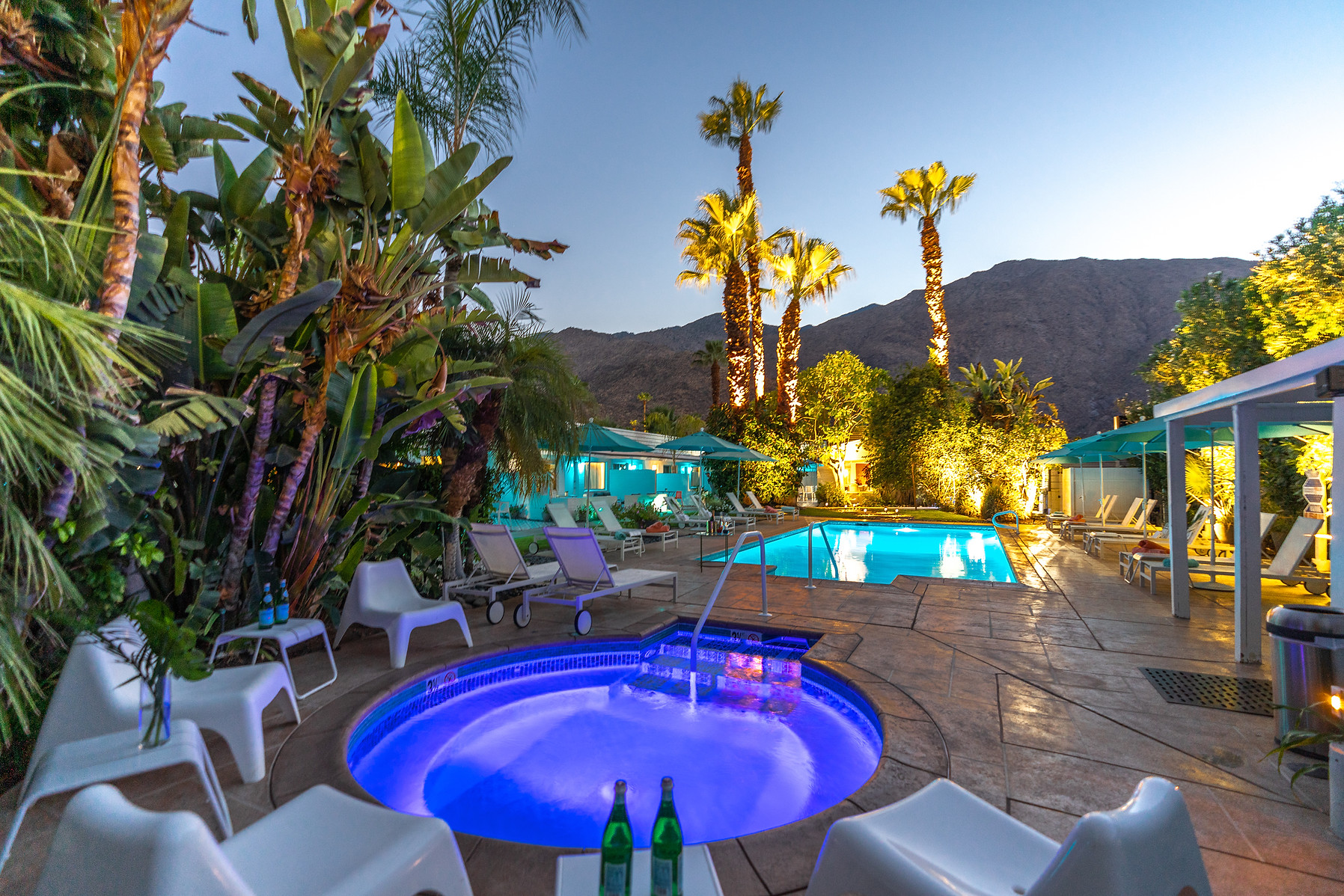 Did you know that Palm Springs is internationally famous? Well, it is. Since 2006, people from all over the planet have been coming to Palm Springs during the month of February for the banging party we call Modernism Week. It’s like the United Nations all up in here.

Before the big event, Modernism Week holds a four-day preview in October called Modernism Fall Preview (a.k.a. Mini-Mod Week), running from October 14 through 17. It’s jam-packed with loads to do — over 50 events!

Modernism Week and Mini-Mod Week are so popular the best events sell out the same day they go on sale. So unless some fabulous bit of wizardry transpires (it might, Palm Springs is magical), forget about Sunnylands and Frank Sinatra’s Twin Palms Estate Tour. There’s plenty left to see though, from significant mid-century modern home tours to architectural double decker bus tours. 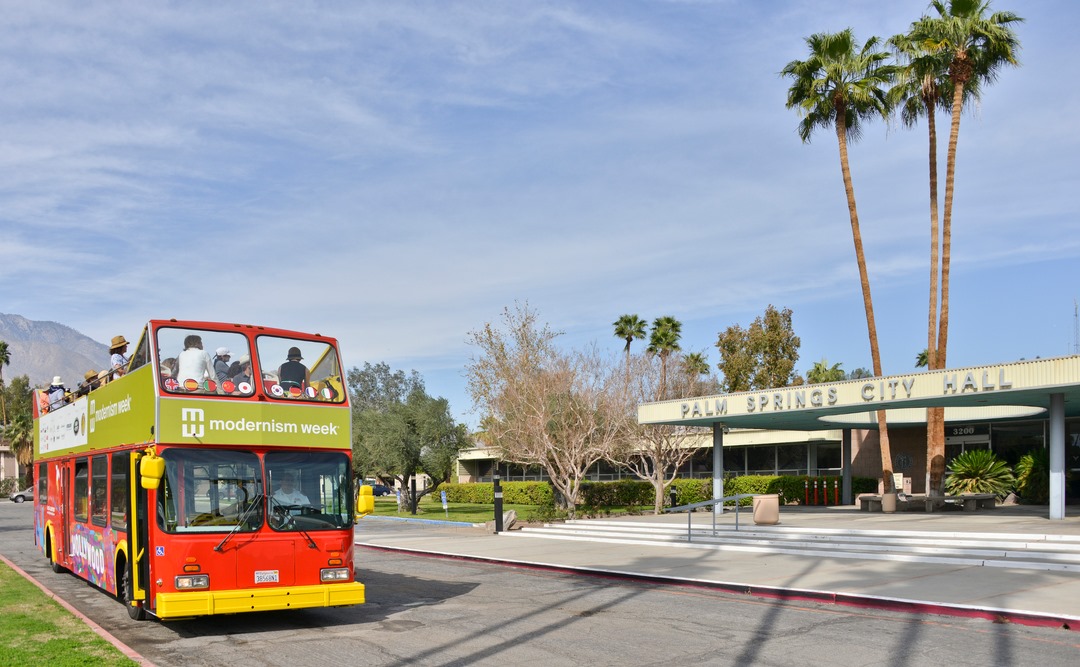 You can dress as you like, but a lot of people choose to pull out their pedal pushers and fedoras — whatever it takes to achieve that retro look. During Mini-Mod Week, the town takes on that old-timey feel of the ’50s and ’60s.

There are some cool cocktail-style events, but those sell out pretty fast. One of my very favorite supper clubs, PS Underground, has a brand new show for this year called Beatnik. Hurry and book, their shows are always outstanding.

Even if you miss out on your favorite events, there’s still the main event at the Palm Springs Convention Center where you can browse everything mid-century modern, including art, furniture, and lighting. You can find a list of exhibitors here.

If you’re the curious type like me, or a little iffy on modernism, this article breaks down mid-century modern art for you. The same with architecture here.

Skipping the party? (You’re gonna say “no” to a party?!) You can still buy a ticket for Saturday and Sunday that will cost you one Jackson (soon to be Tubman!) and gets you in both days so you can shop ‘til you bop later on that evening.

Whether you do or don’t plan on going to the Modernism Week preview, but love the vibe of the mid-mod experience, we have mid-century modern hotels for the complete experience. There are 25 of them, all with great amenities — learn more about these fabulous spots here. 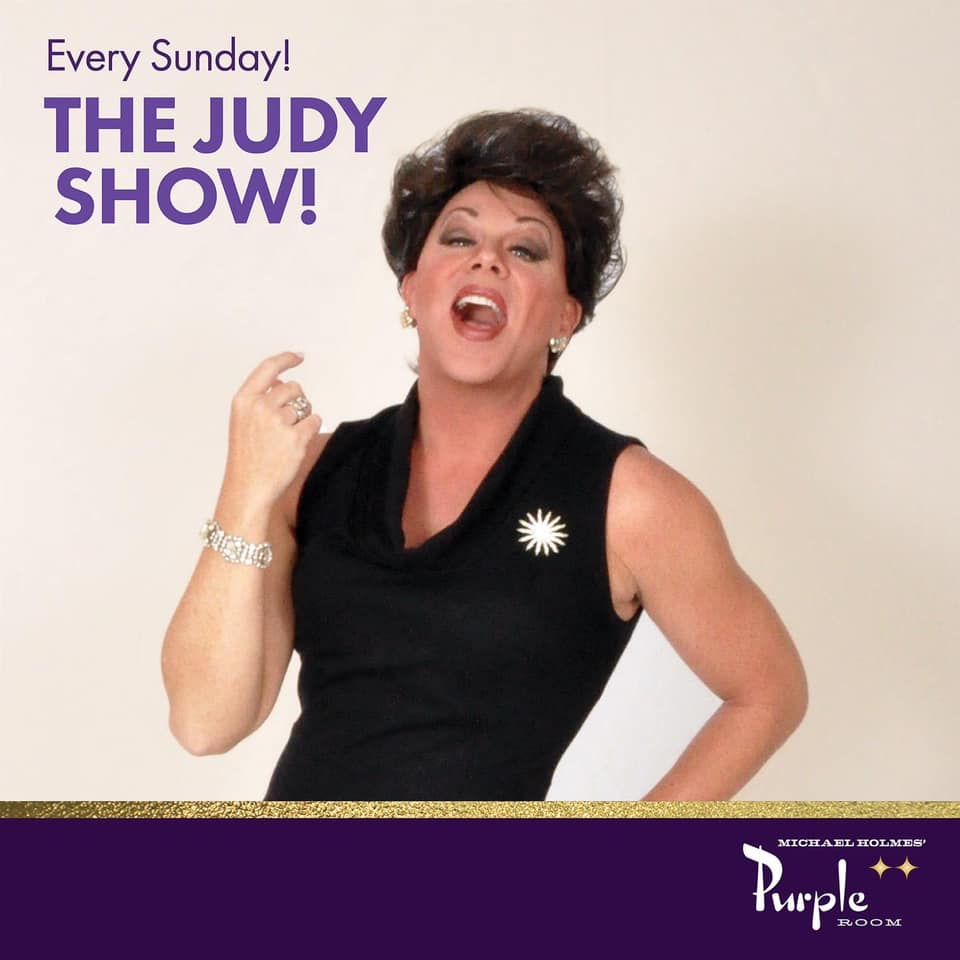 The Purple Room, a Rat Pack-inspired supper club, has some of the finest entertainment in town. Here are the weekend shows during Modernism Preview:

October 17: The Judy Show (my favorite show in town! Every Sunday.)

Also, check out V Wine Lounge, where the vibe is so retro you’ll squee.

By the way, the bus tours are hella fun. I am a tour guide assistant and even from my view (I sit in the bottom of the bus, you’ll be on top — bring sunscreen and hold onto your hats!) it’s a fun and informative 2-and-a-half hour ride.

Hope to see you there, and let’s go retro!

Looking for a serene resort in which to relax? A romantic getaway? A fun and fabulous hotel with high energy? Or a place to catch some sun on your buns?

Here’s the thing about boutique hotels in Palm Springs: they’re each so very different.

So, how do you choose the one that best suits you? Here’s a tip:

Use PSPSH’s vibe sorter to increase your odds of landing in the perfect boutique hotel or resort. There are six vibes to choose from:

Stay in Style: Perfectly Designed Palm Springs Hotels: Palm Springs boutique hotels are known worldwide for their attention to style and design. So, if you’re intrigued by staying in a well-appointed hotel that places an emphasis on architectural flair, there’s a hotel for you. Palm Springs is a design hot spot, and modernism aficionados flock here year-round to stay in some of the finest and most authentic examples of desert-modern and mid-century design. But there are also prime examples of historical Art Deco, Mediterranean, and contemporary design. 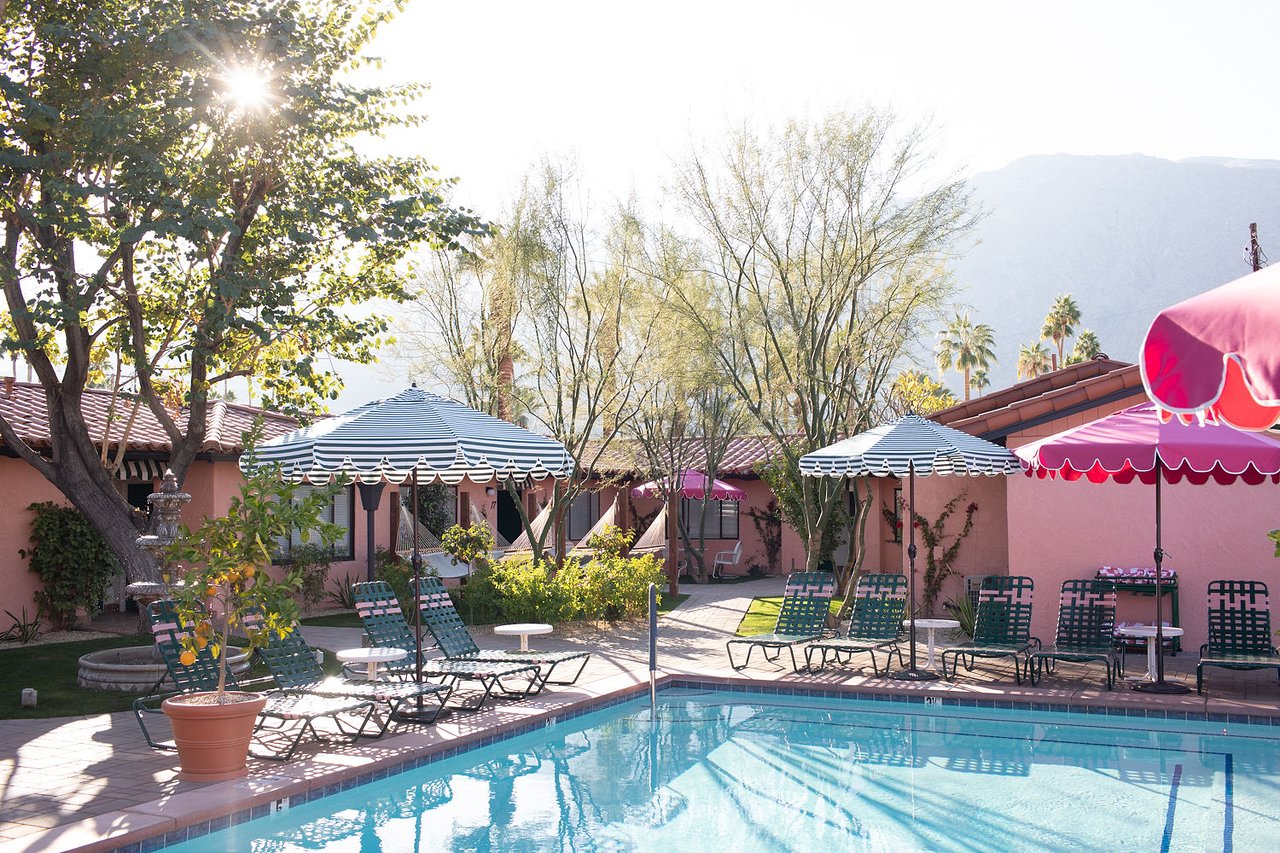 Utterly Tranquil:  Forget the party scene — these hotels cultivate serene quiet environments where social interaction is minimal and staff can usually help you book an on-site massage or a delivered dinner from one of Palm Springs’ many amazing restaurants (some even have restaurants on site!). These hotels are small and intimate…just perfect for that writing, meditation, or personal rejuvenation retreat you long for.

Do Not Disturb: These romantic Palm Springs hotels offer the ideal destinations for that anniversary celebration, honeymoon, or first — or 100th — getaway. These dreamy properties offer exquisite gardens and intimate spaces with plenty of comfort and indulgence for every beautifully love-filled vacation. 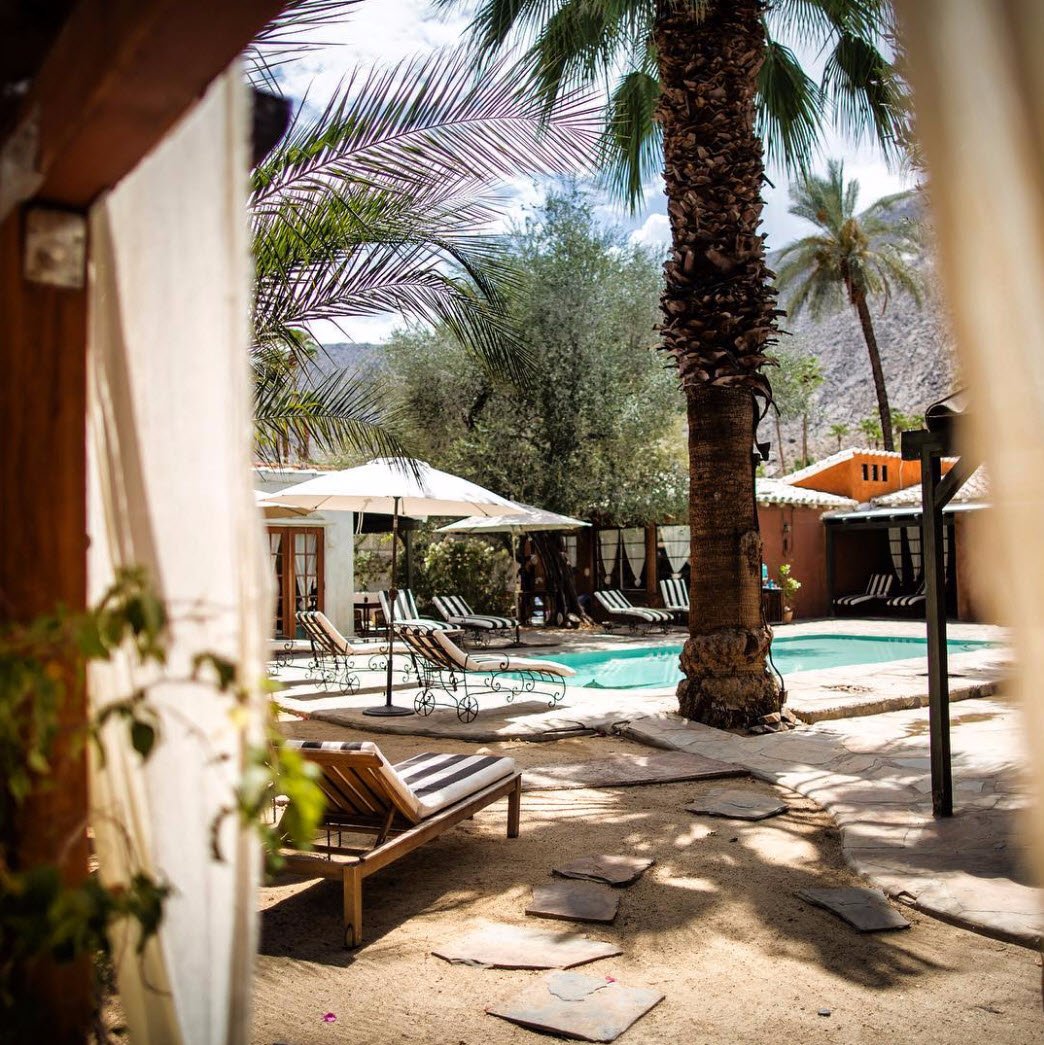 Korakia, one of the most romantic hotels in Palm Springs

Fabulous & Fun Palm Springs Hotels: Sometimes you just have to cut loose! These hotels are known for supporting their guests’ desire for a playful, unforgettable Palm Springs experience. They’re ideal for a bachelor party, a girl’s weekend away, or a reunion with college friends or family. Most of these hotels have less than a dozen rooms — perfect for property buy outs — so you and your party can have the whole place to your party-happy selves. 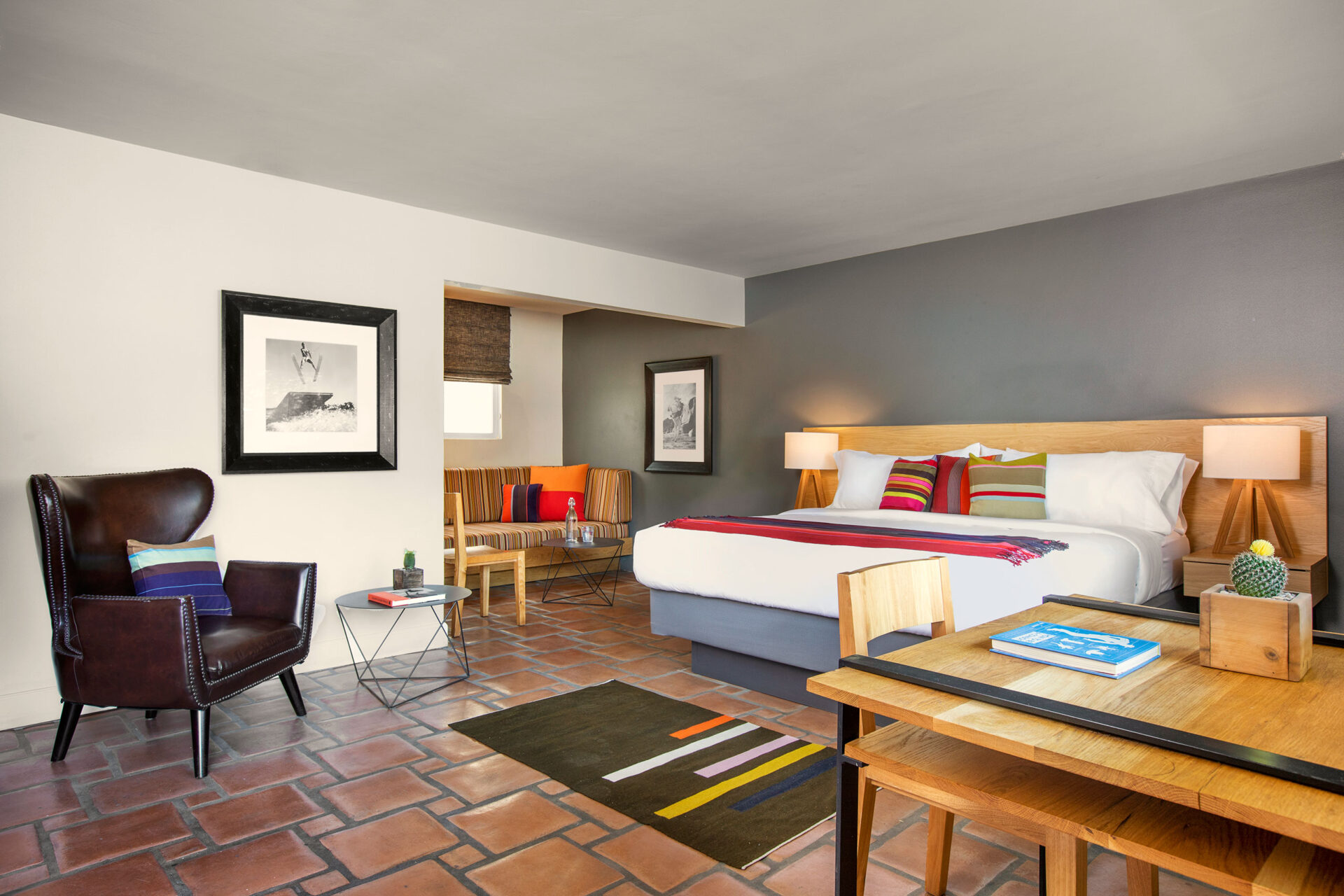 The Santiago, a men’s clothing-optional hotel.

Culturally Queer: LGBTQ Palm Springs Hotels are Here:   The gay community put Palm Springs back on the map. From the bearlicious to the salacious, fit for a queen or perfectly serene, you’ll find an extraordinary concentration of jaw-dropping resorts in Palm Springs that cater to gay men (but also welcome their sisters and allies). Find out why Palm Springs has been a desirable destination for the LGTBQ community for more than five decades.