The Triangle Inn is like a charming man with a cheeky wit and a very sexy smile. Who wouldn’t want a second date?

The Triangle Inn spans the corners of San Lorenzo (très exotique, non?) and Random Road, a flirty wink from the street naming committee.

When it was built, the hotel was called The Impala Lodge. The year was 1958, and the architect was notable mid-century modernist Hugh Kaptur.

Kaptur apprenticed for mid-mod darlings Harrison and Wexler, and Wexler apprenticed under the man they called the Desert Maverick, William Cody. In a 1958 Desert Sun article, Kaptur described the architectural design of the Lodge as the highly non-PC “Indian Modern.”

Then, like the rest of us, the lodge went through some changes. From lodge to apartment building and into disrepair, the modernist gem was badly in need of an image overhaul.

In the late 1980s/early 1990s, Matthew Robinson and Kevin Rice purchased the property, restored the original architecture, remodeled the rooms, and when the flag finally flew it was a rainbow flag, waving high above the newly named Triangle Inn, an eight-suite, men’s clothing optional resort. 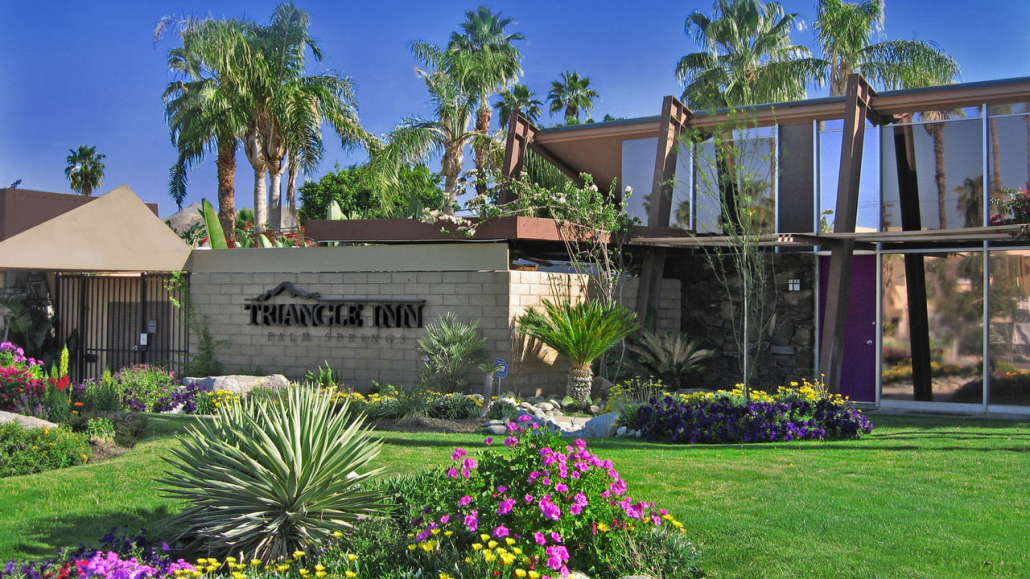 In 2000, Robinson and Rice were looking for someone to love the inn as much as they did, and ran into some wicked good luck. Two frequent Palm Springers from Atlanta (let’s call them Michael and Stephen because those are their names) decided they wanted to live in paradise and purchased the classy little mid-century revival gem.

Its massive glass-paned walls let the sunshine in and provide an endless view of our gorgeous mountains. Angular steel beams and the slanted roof are punctuated by lush tropical foliage; there are fruit trees all over the property —  mango, lemon, blood orange — making it feel as remote and as exotic as Gilligan’s Island without Ginger, Marianne, or the Howells (they’re so pretentious), but with way better amenities.

But it’s not remote; it’s intimate. The hotel is actually only five minutes from downtown Palm Springs. That’s five by car, 15 if you’re biking. Drinking and biking renders various results, but generally longer durations and is not recommended.

Rating: A Star is Born 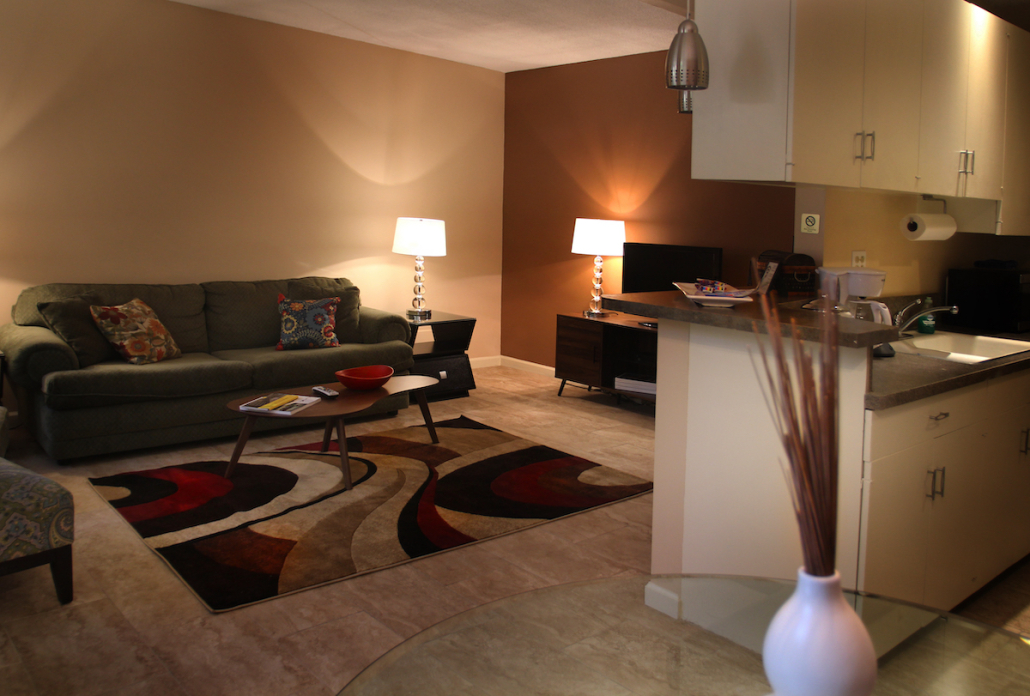 Consistently garnering five-star ratings and rave reviews, it shouldn’t surprise you that The Triangle Inn has a very long history of repeat guests. There are many reasons for this — the lovely suites, the fine amenities — but also because there is zero judgment. They’re very light on the rules, and then there’s that southern hospitality: warm as the sun and cool as the night air.

Breakfast offers an assortment of breads, fruit, yogurt, and cereals, as well as coffee and tea — all gratis — on the covered patio by the pool. If you’d like a White Claw (again, no judgments, you’re on vacation) they’re $3 and you can drink them poolside. It’s all very chill.

The suites echo the style of the exterior, all in the mid-mod aesthetic, dressed in earthy tans and browns; light, sky blues; and rich sunset oranges. Even the Tarocco bath amenities are in burnt orange. 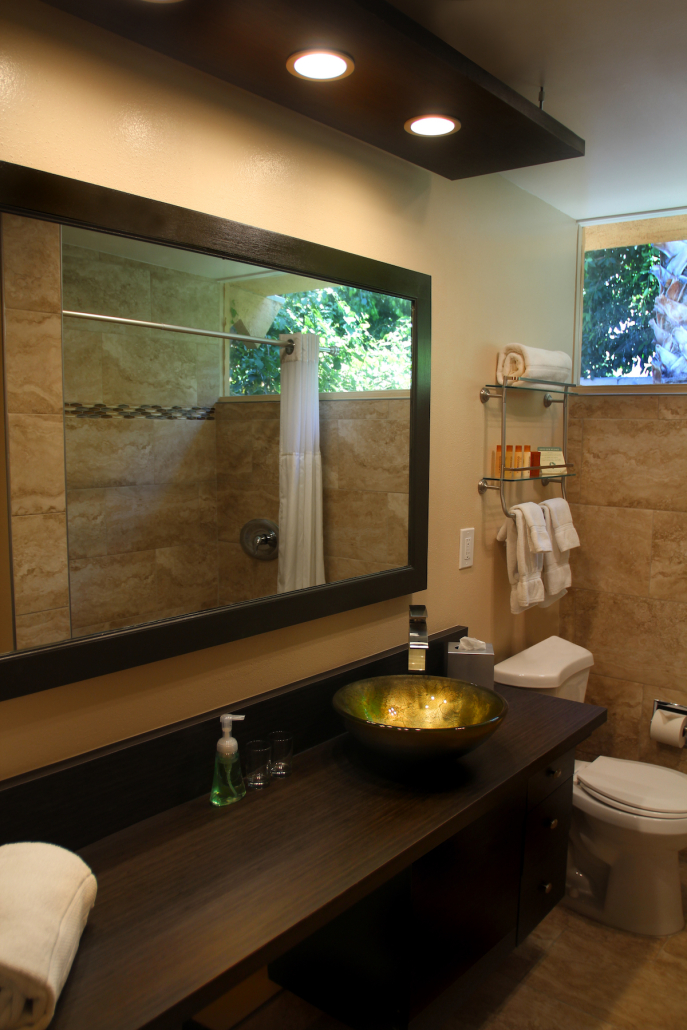 The bed linens are crisp 500-count cotton, and all the accommodations have either a kitchen/dining room or a kitchenette depending on room size. Instead of a dishwasher in each of the suites, the houseman takes care of the dishes when he tidies your room.

Of all the places you can choose to stay in Palm Springs, The Triangle Inn is, perhaps, the most social. The intimate setting provides an opportunity for guests to become lifelong friends, not just with Michael and Stephen, but with each other, flying in from all over the world to meet up for a repeat performance.

Yet, because the rooms are all down the corridor, away from the outdoor activities, festivities, and laughter, guests can work from their suites before they go out to play. Some book for a month at a time, several times a year. It’s their home away from home. And because Michael and Stephen live on property, guests experience family-style hospitality that’s all rom-com and zero drama.

Rating: All the stars 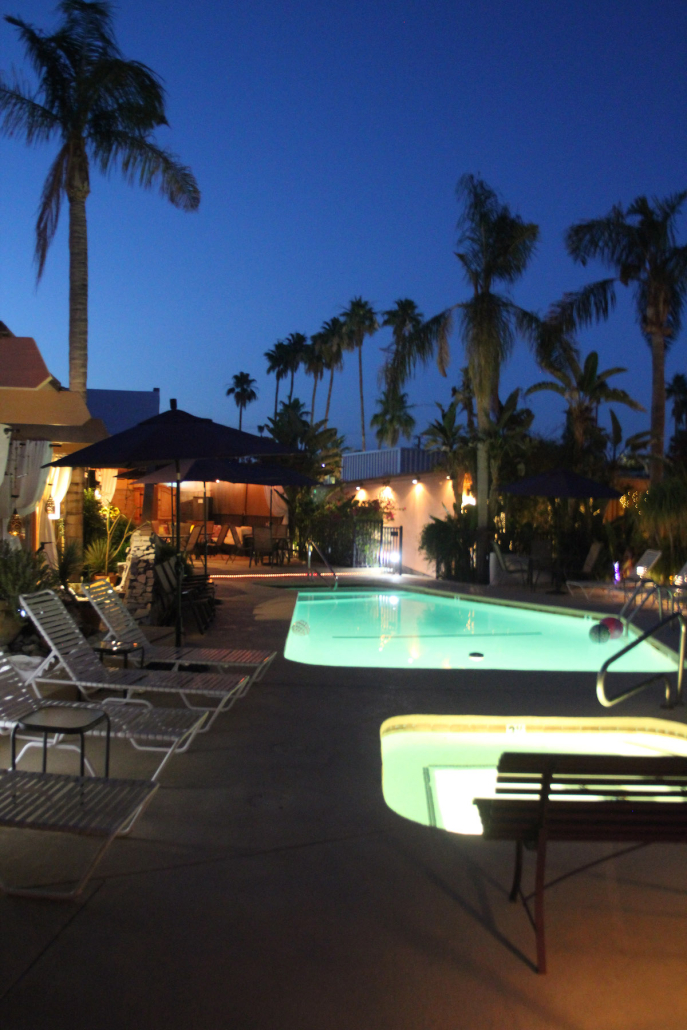 The pool at night. Photo courtesy of The Triangle Inn