You are here: Home1 / Hotels2 / Spirit of Sofia 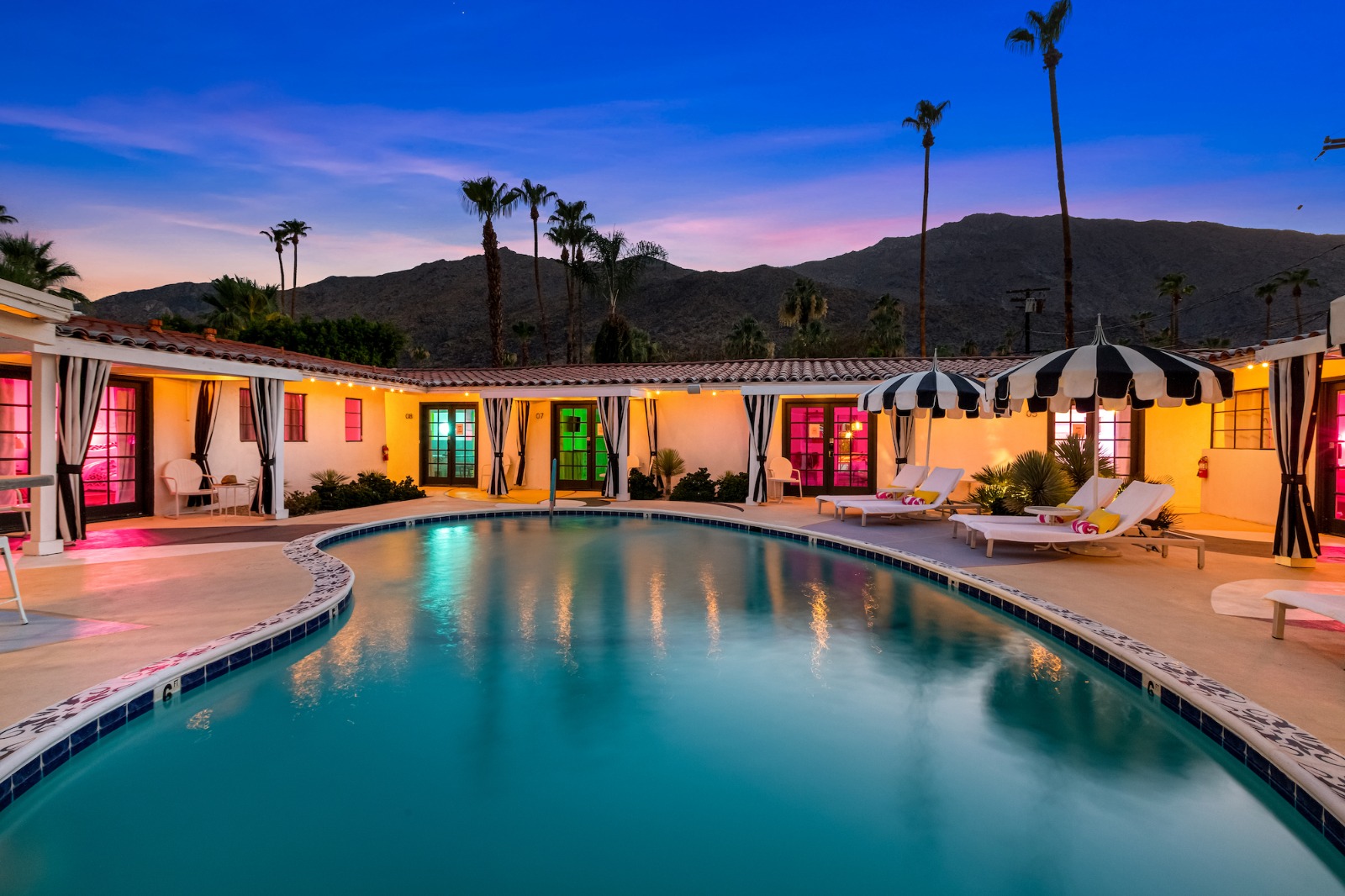 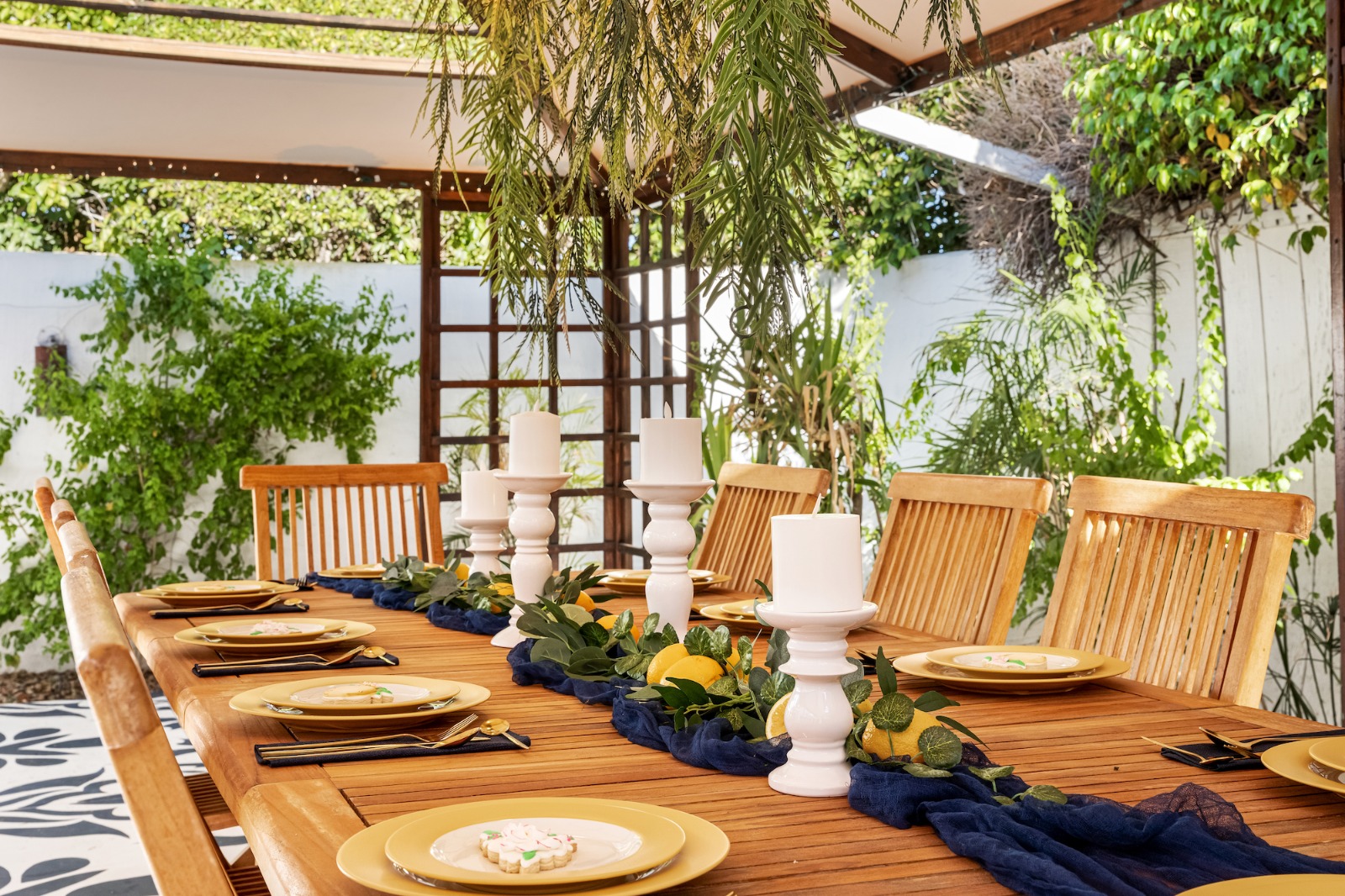 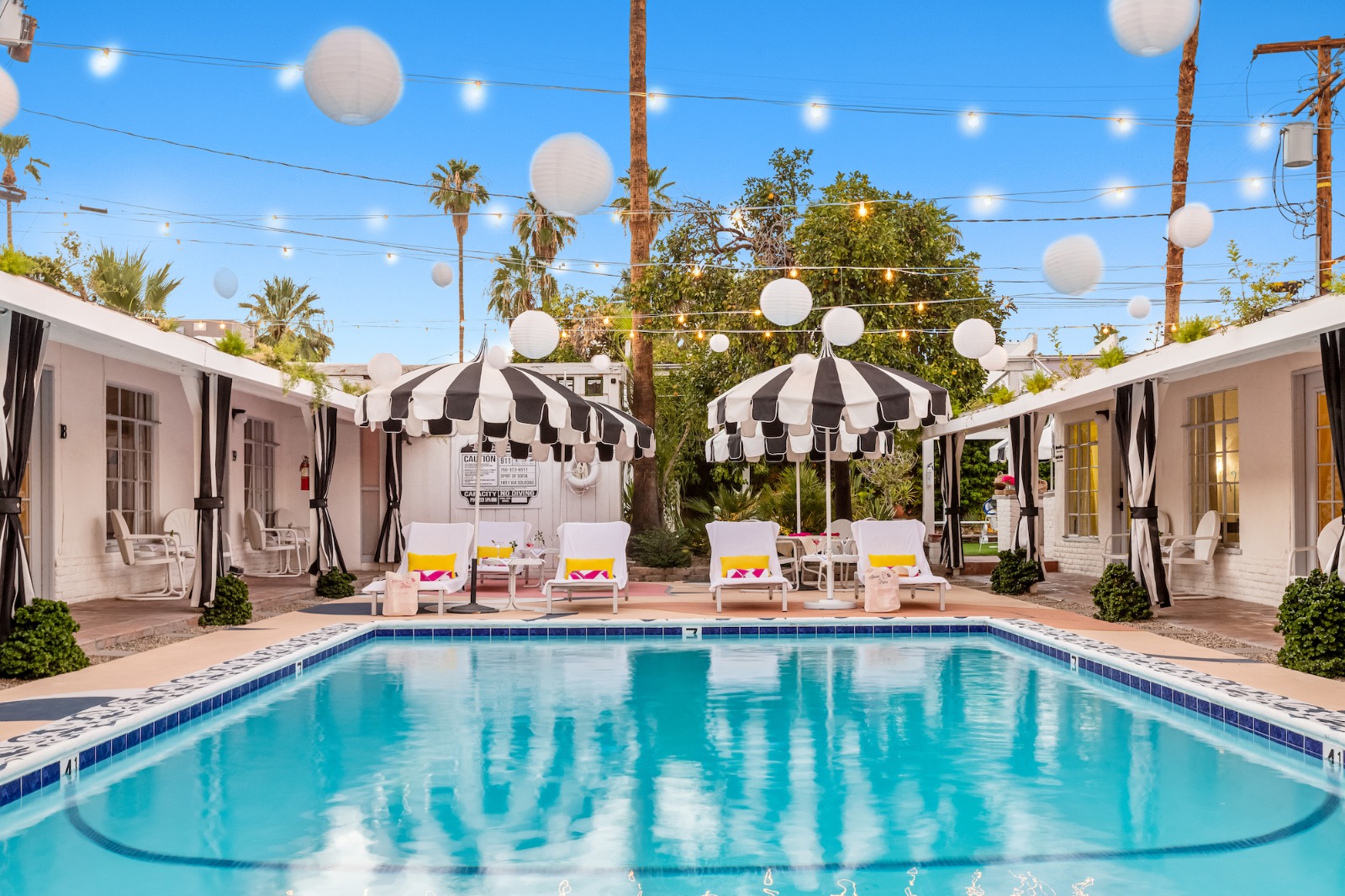 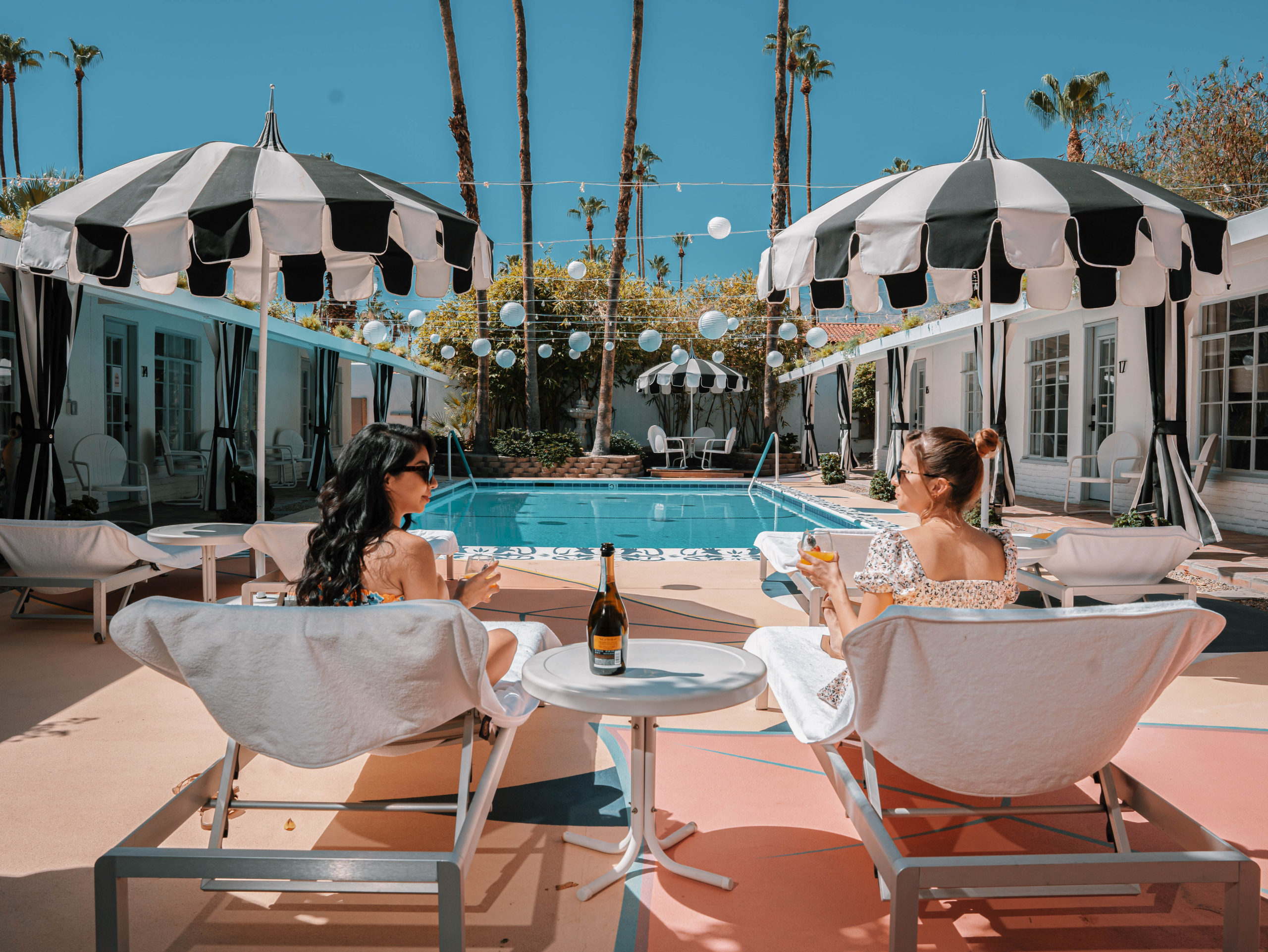 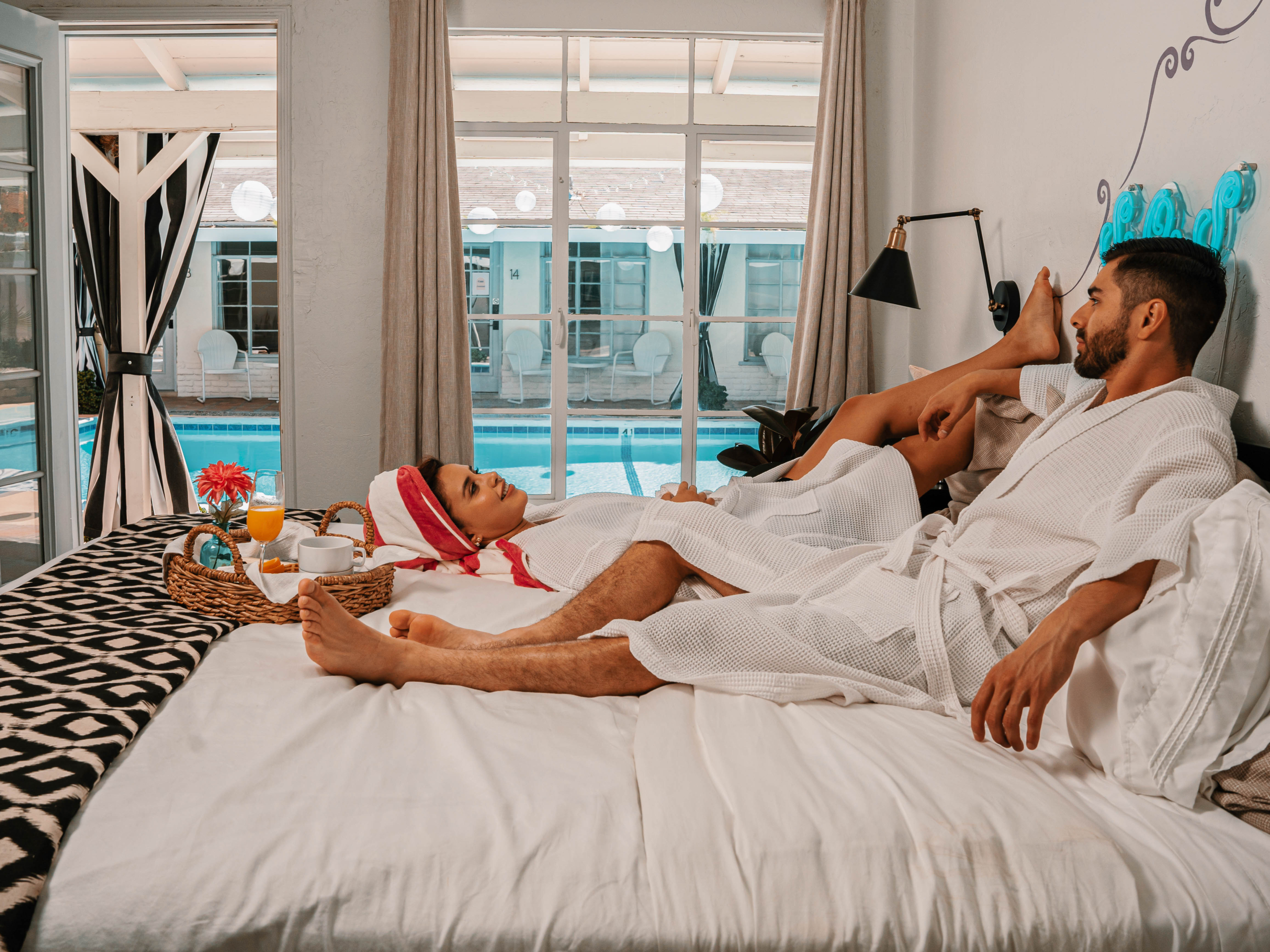 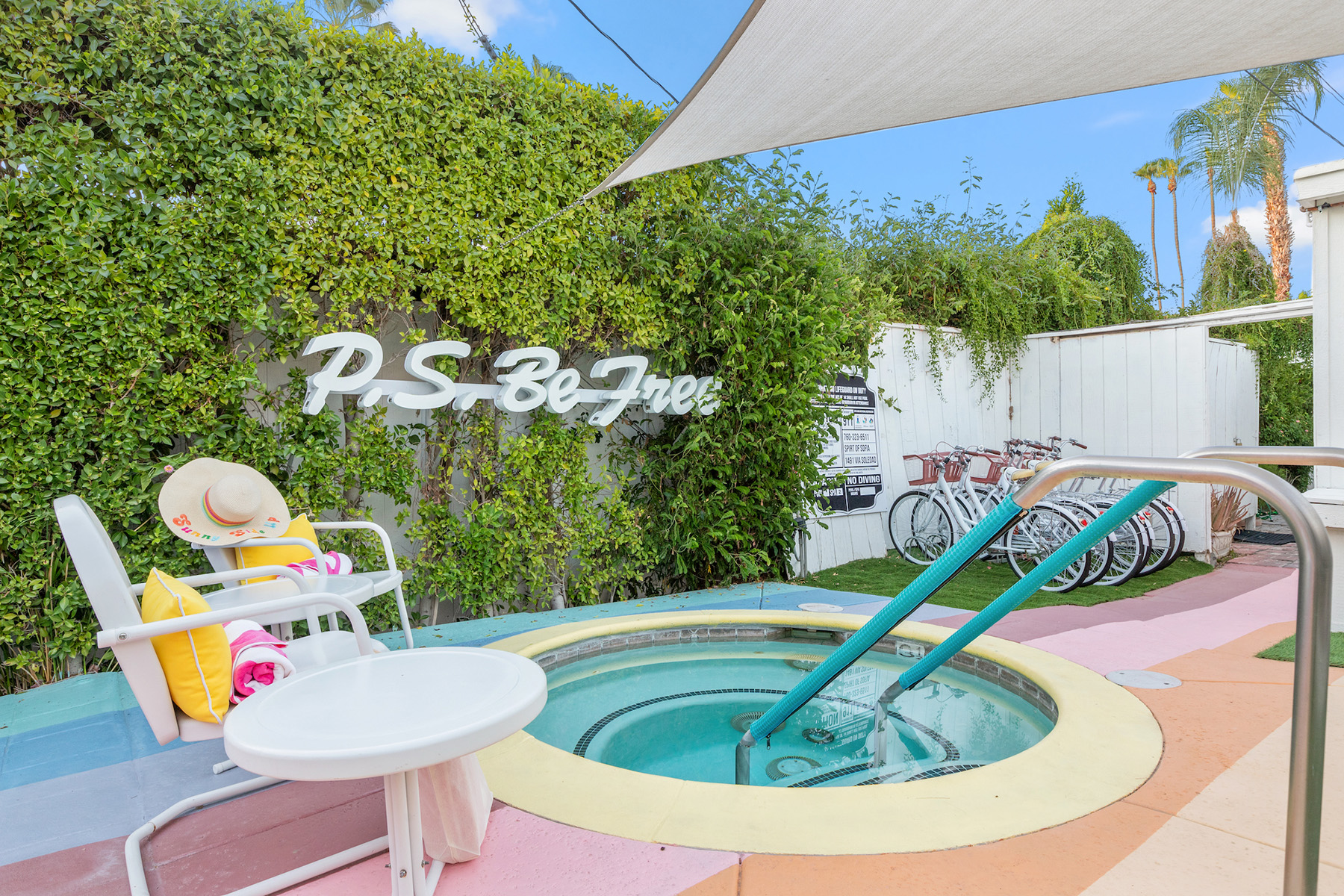 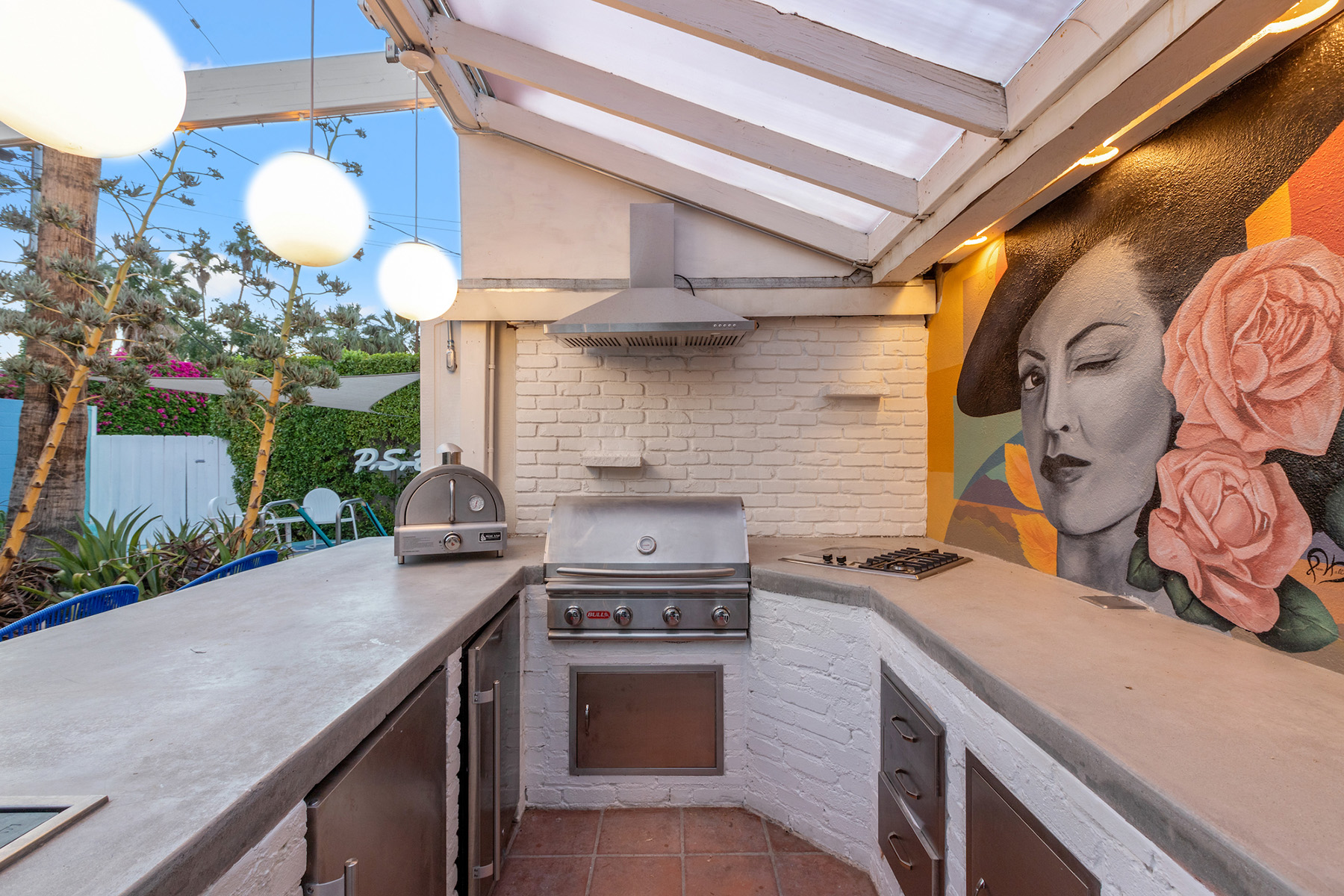 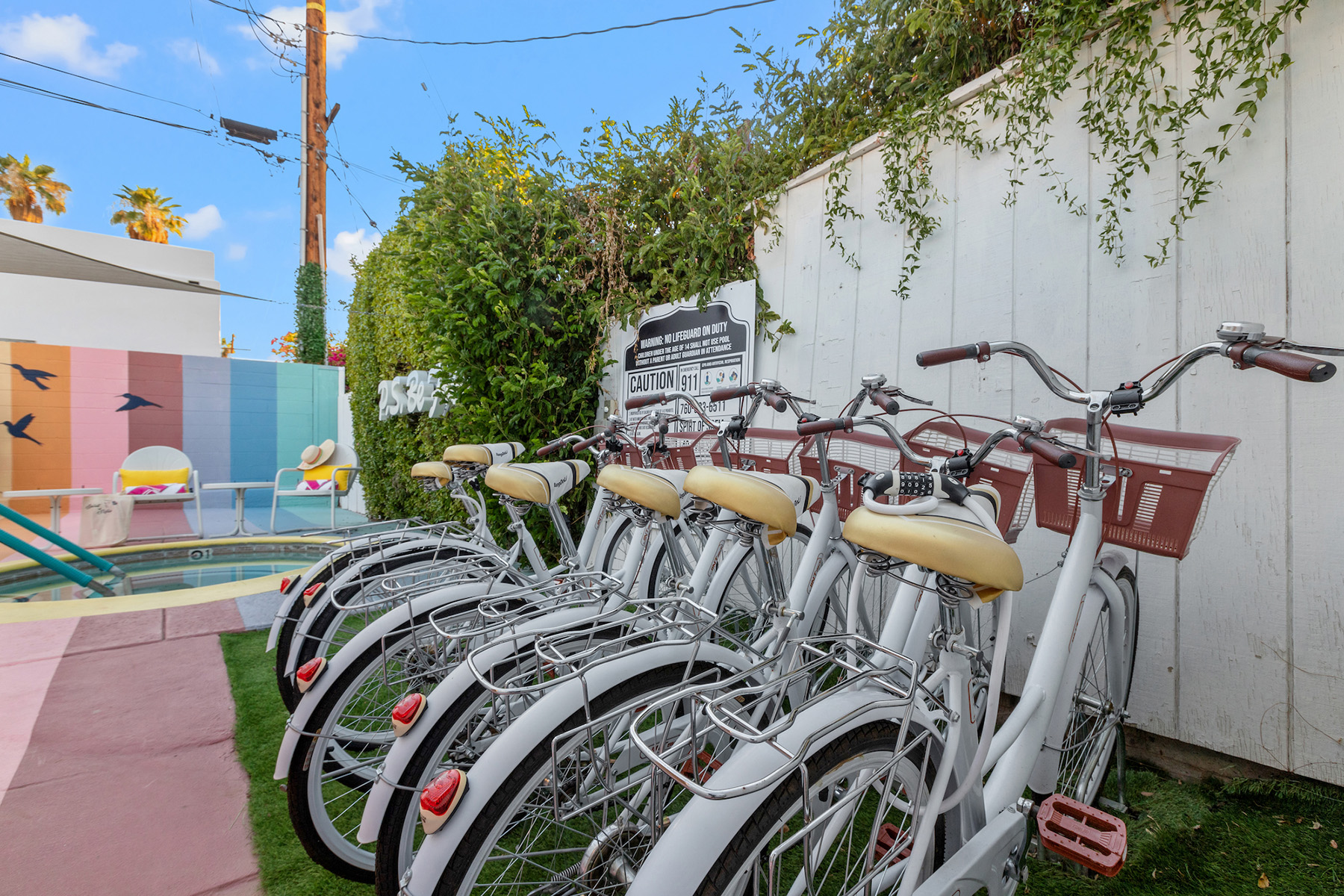 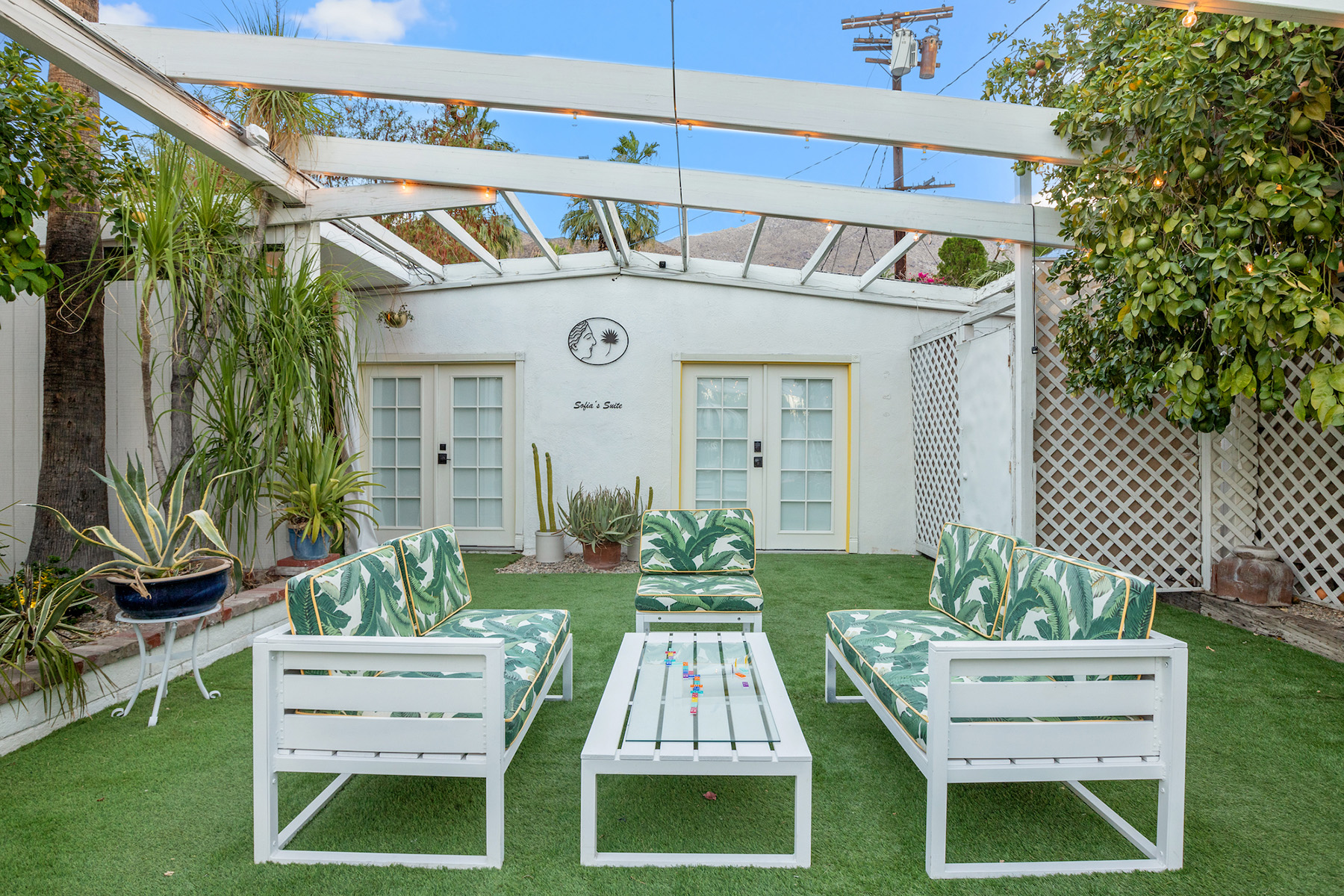 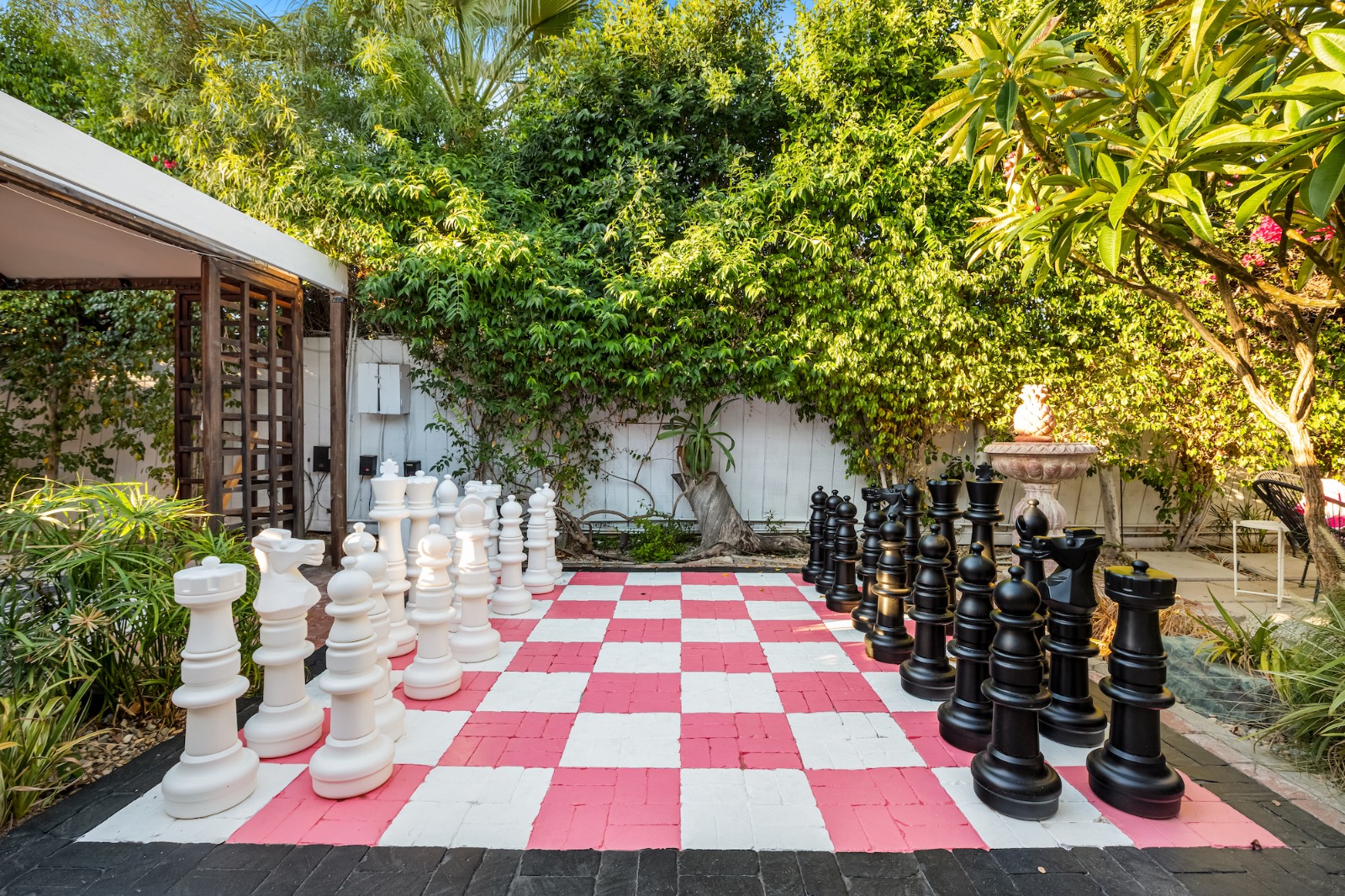 Spirit of Sofia’s Poolside Adventure is the most Palm Springiest experience in all of Palm Springs! Located in Downtown Palm Springs, Spirit of Sofia is framed by the backdrop of mountains, palm trees, and mid-century modern homes. Step outside your room/cabana and right into the pool. Spirit of Sofia has it all with heated pool, hot tub, grill, outdoor dining, overflowing with poolside seating, floaties, neon signs, bright colors, rainbows, road bikes, and even a life-size chess board!

Connect with this hotel:

When trying to figure out a new name for their hotel, owners Ben Wolff and Jesse Comly and designer Kirah Hitchcock were stuck — until they noticed an old book sitting out in the lobby.

The hotel, last known as La Dolce Vita, was originally built in the 1920s, and because the team was completely renovating and rejuvenating the property, they wanted a fresh name to go with it. It turns out the book was actually a diary written by a woman named Sofia, a former owner of the hotel and possibly the original builder.

“It tells the story of a lady who moved to Palm Springs, and was the ‘Palm Springs-iest’ character ever,” Jesse said.

Ben, Kirah, and Jesse were also spending a lot of time exploring Palm Springs, emulating the experience they want their guests to have — riding bikes downtown, trying new restaurants, getting to know the different types of architecture dotting the landscape. One day when they returned to their property, Kirah said it felt like the spirit of Sofia was there, and immediately, Ben announced, “Oh, that’s the name of the hotel.”

“This story became the theme of the hotel,” Kirah said. “We want to give guests the chance to break away from the real world for a moment, to have escapism and a playful atmosphere. That is the story of Sofia.”

Upon arrival at the Spirit of Sofia, guests are greeted by a hand-painted mural of a woman dancing and morphing into a hummingbird; in her diary, Sofia wrote about dancing around the hotel. There are other quirky touches across the property, including a giant outdoor chessboard and a 10-foot-tall palm tree chandelier, and the rooms contain custom artwork, bedding, and upholstery. Guests will likely want to spend a lot of time outside, either splashing in the pools, checking out the steam room, or cooking a delicious meal in the full outdoor kitchen with pizza oven.

The decor is an “eclectic mix,” Kirah, who owns the Coachella Valley-based Vander Design, said, with bits of Old Hollywood, mid-century modern, and boho. The team enjoyed being able to start from scratch, with Ben saying, “It really was a tabla rosa — everything was white and clean. It needed some updating, but there was so much character that could be added to this blank slate.”

“The two sides are quite private and blocked off from each other, so if you did just buy out one of the sides, it feels totally private,” Ben said. “At the same time, that group isn’t going to take over the space of the individual guests on the other side. Both sides have a separate feel.”

Ben, the founder of Onera, has worked on opening hotels in other cities, but this is his first Palm Springs project. The Spirit of Sofia team started renovations in November 2021, and they have been guided by the idea of offering guests “a poolside adventure.” Every room at the property is just a few feet away from the pool, and “that’s relatively unique,” Ben said. “We like that, especially in the hotter months.”

The Spirit of Sofia is in an “incredible location,” Ben adds, with stunning views of the mountains. The property has mature landscaping and feels secluded because of the tall hedges, and Kirah said she’s “never seen a hotel like this, so lush and so green, in Palm Springs. It’s pretty incredible.”