Blog
You are here: Home1 / Blog2 / Clothing optional3 / The Triangle Inn Owners are Nearing a Milestone Anniversary: 20 Years in... 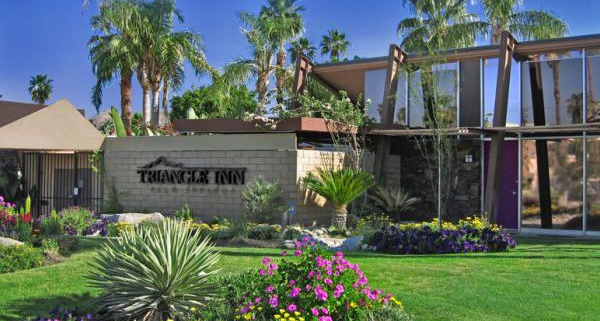 For Michael Green, the past two decades feel like they’ve gone by in the blink of an eye.

Michael and his husband Stephen Boyd own The Triangle Inn (https://www.palmspringspreferredsmallhotels.com/stay/triangle-inn-palm-springs), a gay men’s clothing-optional resort, having purchased the property in January 2000. They bought the hotel after spending their careers in advertising, embracing the opportunity to try something new. Now, nearly 20 years later, Michael can’t believe they’ve been hoteliers for so long.

Michael and Stephen have created such a welcoming atmosphere that it’s inspired several guests to actually move to Palm Springs.

People often ask them if they’re tired of running their own business, or want to try something new. “To me, as long as we still enjoy it, we should keep doing it,” Michael says. “It’s great owning a small hotel. It’s a lot of work, but it’s also a great lifestyle.”

The Triangle Inn was built in 1958, and Michael and Stephen are its fifth owners. They’ve been through renovations and upgrades, and are always doing something to enhance the property. Along the way, they’ve made tons of friends, and have created such a welcoming atmosphere that it’s inspired several guests to actually move to Palm Springs.