Blog
You are here: Home / Blog / Architecture / Get Ready for Your Close-up at Korakia Pensione 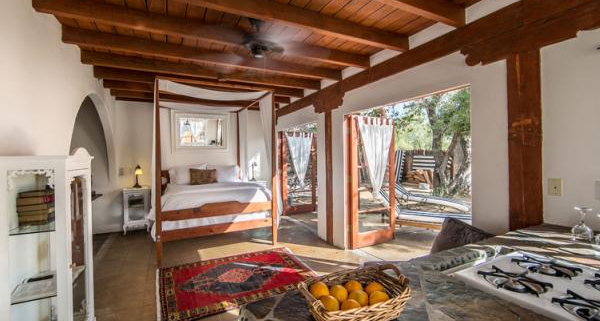 Korakia Pensione (https://www.palmspringspreferredsmallhotels.com/stay/korakia-pensione) is one of Palm Springs’ most unique hotels.

It’s actually three separate buildings — an adobe dating back to 1918, a bungalow built in 1924, and a 1930s villa. There isn’t just one vibe, as Korakia Pensione has touches of Northern African and the Mediterranean; there are arches and fountains and candles everywhere, with guests able to slip into one of two saltwater pools at any time of day. There’s also a library, which has been a gathering place for writers and artists and musicians for decades.

The property’s one-of-a-kind feel makes it perfect for photo shoots. The hotel has been prominently featured in several of the world’s most popular magazines, including Vogue, Elle, and Architectural Digest. Of course, it’s also been the backdrop in countless wedding pictures, as the hotel and its stunning views of the San Jacinto mountains and palms have attracted brides and grooms from around the world.

Want to join the discussion?
Feel free to contribute!

Take a Bite out of Holiday House
Scroll to top